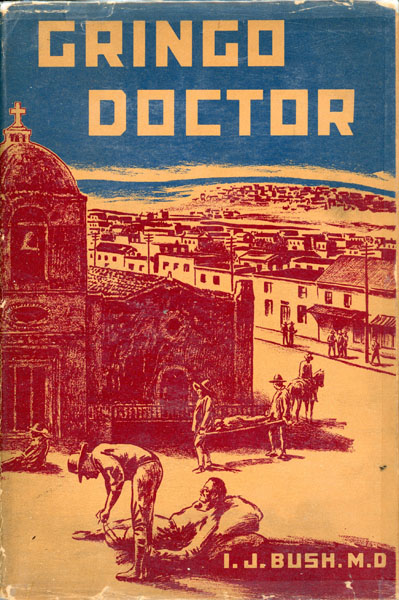 First edition. 8vo. Decorated cloth, decorated endpapers, 261 pp., frontispiece [portrait of Col. I. J. Bush], foreword, illustrated. Foreword by Eugene Cunningham. Wonderful art work throughout the text including the attractive wrap-a-round dust jacket art by James Wallis. Story of a doctor who moved to El Paso, Texas for his health and began work in El Paso and surrounding small villages and towns. War began in the Rio Grande and Dr. Bush became surgeon general of the Insurrecto Army, where he witnessed first hand some of the fiercest fighting of the Mexican Revolution. When this book was published in 1939, Dr. Bush was a resident of El Paso where he still practiced medicine. Six Guns 348 says: "Has some minor material on John Wesley Hardin, John Selman, and Jim Miller." Former owner's penciled name on half title sheet, else a fine copy in the elusive, dust jacket which is price-clipped with light wear to the spine ends and extremities