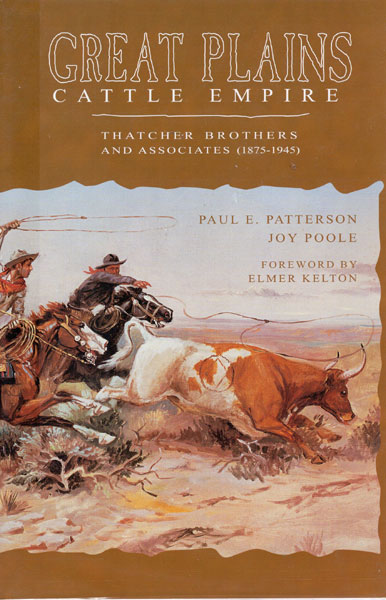 First edition. 8vo. Cloth, xviii, 211 pp., foreword, preface, acknowledgments, map, illustrated, epilogue, notes, bibliography, index. Foreword by Elmer Kelton. John and Mahlon Thatcher from their base in the First National Bank of Pueblo, Colorado, were pioneers in merchandising, mining, and banking. Together with associates such as Frank G. Bloom and Burton C. Mossman, they led the development of the ranching industry on the Great Plains from 1871 to 1944. At the peak of their cattle empire, the Thatcher Brothers financed and directed the Bloom Land and Cattle Company, Cresswell Land and Cattle Company, Diamond A Cattle Company, and the Hatchet Cattle Company. Their livestock ranged on some 11 million acres of public and deeded lands from New Mexico to the Canadian provinces. Fine in dust jacket. Dust jacket depicts THE HERD QUITTER by Charles M. Russell.

The First Cattle Ranch In Texas
by Anahuac, Texas The Progress