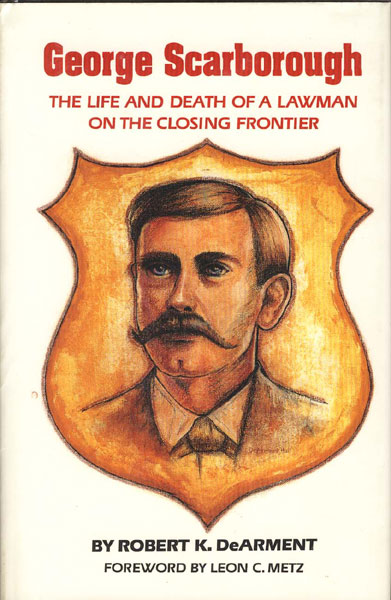 George Scarborough. The Life And Death Of A Lawman On The Closing Frontier

First edition. 8vo. Signed by the author on a bookplate and laid-in. Cloth, xiv, 322 pp., frontis, foreword, preface, acknowledgments., illustrated, maps, afterword, notes, bibliography, index. Foreword by Leon Metz. George Scarborough was tried for murder on three occasions; he was acquitted each time. Although he had spent much of his adult life as an officer of the law and was wearing a badge when each of the killings took place, sufficient questions surrounded the cases to prompt authorities to indict him and bring him to trial. His activities as a lawman during the final years of the nineteenth century were marked by controversy and are disputed to this day by students of the period. Even his death is shrouded in mystery. Scarborough killed John Selman, who had recently killed John Wesley Hardin---his story is told here for the first time. Fine in dust jacket.

A Line To Kill
ANTHONY HOROWITZ