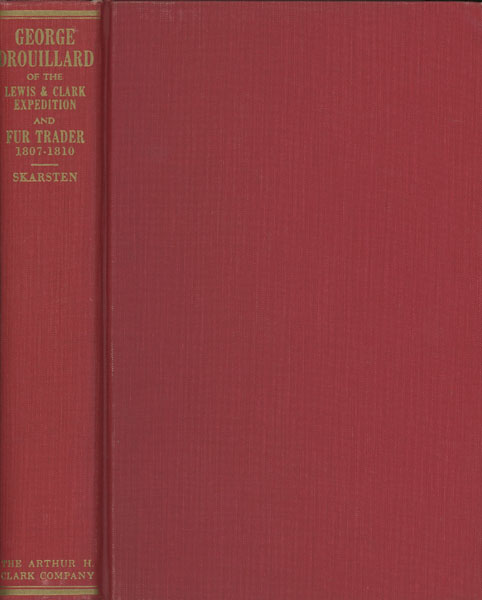 George Drouillard, Hunter And Interpreter For Lewis And Clark And Fur Trader, 1807-1810.

Other works by M.O SKARSTEN

Western Frontiersmen Series XI. First edition. Octavo. Cloth, 356pp., preface, illustrated, two maps, bibliography, index. "From the various journals of the Lewis and Clark expedition and from many more obscure documents, letters and legal records, the author presents not merely an account of the pursuits in which Drouillard engaged, but an idea also of the kind of man he was. The variety of responsibilities assigned to Drouillard form an impressive list - recruiting of personnel, message bearing, retrieving a deserter, pursuing strayed and stolen horses, trading for horses and for canoes, horse gelding, as river-boat helmsman, diplomat to the Indians, boon companion to Lewis –in addition to the hunting and interpreting for which he was specifically hired. Further, Drouillard played a major role in each of the four or five crises of the expedition, and later, as a fur trader, furnished Clark with mapping details of the present Montana-Wyoming area. As partner to Manuel Lisa in the fur trade, in company with John Colter, Thomas James and others, on the Yellowstone, Big Horn, Shoshone, Rosebud and Tongue rivers, and the Three Forks of the Missouri, Drouillard¹s activity during 1807 to 1810 receives detailed attention; together with his attempt to trade with the Blackfeet, and later, his death at their hands in April 1810. Drouillard¹s trial for the murder of Bissonette, and other court actions with Drouillard as both defendant and plaintiff, add new and interesting material." "Drouillard played a primary role in the success of the Lewis and Clark expedition. Following that service he was a partner of Manuel Lisa in the fur trade and established several forts in the Missouri Basin. He trapped with John Colter and others on the Yellowstone, Big Horn, and other rivers. He was killed by Blackfeet in 1810."-- Clark/Brunet #232. Fine copy with the original prospectus laid-in.

Military Headgear In The Southwest 1846-1890.
SIDNEY B. BRINCKERHOFF