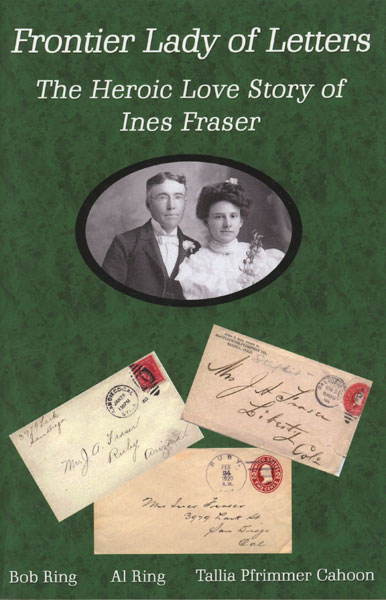 First edition. 8vo. Signed by all three authors on the title page, viii, 182 pp., frontispiece, preface, introduction, illustrated from photographs, maps, acknowledgments, about the authors. The story of a woman who lived her early years in mining camps in Alaska, Colorado, and Arizona. "Twenty-three-year-old Ines, a schoolteacher from Salida, Colo. - just married to miner Jack Fraser - arrived in Tucson by train in August 1904. Ines and Jack were on their way to the Los Alamos gold mine, near Ruby, where they hoped to strike it rich. Jack and Ines struggled to make a living in an unforgiving environment. Between 1911 and 1917, Ines had three children. For each birth, Jack sent her to San Diego or back home to Salida so she could receive better medical care than was available in the rough borderland. During those long separations, Ines and Jack wrote beautiful, loving letters to each other - Ines keeping Jack apprised of her condition and hopes to return soon, and Jack telling Ines of his struggles to make the mine successful. But the mining troubles continued - Jack wanted desperately to find another occupation. And Mexican bandits were raiding across the border with increasing frequency. As Ines left for San Diego in mid-1919 to prepare for the birth of the couple's fourth child, Jack was eagerly negotiating to buy the general store in Ruby. He did buy the store and was happily awaiting Ines' return from San Diego with their new daughter, Constance, when, on Feb. 27, 1920, he was shot and killed by Mexican bandits in his store. Ines settled her husband's affairs, sold the store and returned to San Diego. There she raised her four children alone during the Great Depression." The letters that tell the incredible story, unveiling not only a glimpse into the Gold Fever pioneer life, but also portraying an unforgettable love story. As new, unread copy.

Wanderer Of The Wasteland
by Zane Grey

North From Texas; Incidents In The Early Life …
by James C. Shaw

Rails To Carry Copper. A History Of The …
by Gordon Chappell