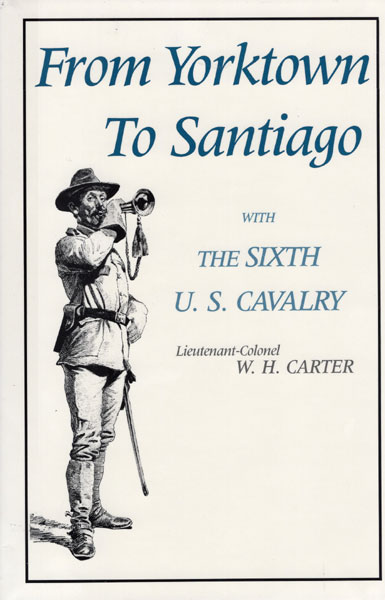 From Yorktown To Santiago, With The Sixth U.S. Cavalry.

First edition thus. Originally printed in 1900 by the Lord Baltimore Press. 8vo. Introduction by John M. Carroll. Cloth, [4], 329 pp., introduction, preface, illustrated, aftermath, index. Illustrations by Frederic Remington and others. The Sixth U.S. Cavalry had its birth during the Civil War with its first action at Yorktown, Virginia in 1862. From 1865 until 1871 the regiment was stationed in Texas protecting settlers from raids by the Comanche Indians along the frontier. After 1871 the regiment moved into Kansas and Indian Territory, and in 1874 were under the command of Col. Miles in his operations against the Comanches, Cheyennes, and Kiowas. The next ten years were spent in Arizona and New Mexico in operations against the Apaches. The last action against Indians was at Wounded Knee in 1890. In 1898 the unit operated in the Spanish-American War and distinguished itself in the battle of Santiago. A large part of the original first edition was destroyed by fire, making it one of the scarcest and most expensive histories of a major military unit. As new, unread copy, in dust jacket.

The Opening Of Texas To Foreign Settlement 1801-1821
by M. A., Mattie Austin Hatcher

Optimists In A Desert "Paradise"
by ("Mickey") Mrs. Keith Carlton

Comanches. The Destruction Of A People.
by T. R. Fehrenbach