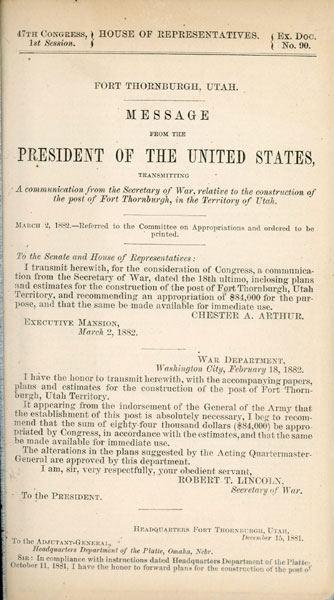 Fort Thornburgh, Utah. Message From The President Of The United States Transmitting A Communication From The Secretary Of War, Relative To The Construction Of The Post Fort Thornburgh, In The Territory Of Utah

by Chester A. Arthur

First edition. 8vo. Printed wrappers, bound into a cloth binder, 3 pp., large folding map. Contains the fold-outs 'A). Plans, Sections & Elevations of a Post Headquarters Building, designed for erection at Fort Thornburgh, Utah. 1881' [74 cm x 50 cm]; 'B). Proposed Buildings Fort Thornburgh. Utah Ter.' [51 cm x 73.5 cm]; 'C). Proposed Buildings Fort Thornburgh. Utah.' [52.5 cm x 43 cm] Architectural drawings for proposed structures at the short-lived Fort Thornburgh in eastern Utah, by G.W. Field with two pages of introductory material. The Fort was constructed after the Meeker Massacre and the forced relocation of some Utes to the Uinta basin. "Fort Thornburgh was first established in September 1881 by Captain Hamilton S. Hawkins near the present site of Ouray, Utah. In April 1882 the fort was moved under the direction of Captain J. P. Schindel, acting in Captain Hawkins's temporary absence. The new location of the fort at the mouth of Ashley Creek continued until its abandonment in 1884. This short-lived fort is more famous for the events that brought its name and its establishment than for its scant three years of existence." -page 201 'Utah History Encyclopedia.' Near fine copy housed in a binder with titles stamped in white on the front cover. A fine sturdy protective binder.

The Scrub Must Go
Ralph A. Hayne [Agricultural Extension Department]

Why People Enjoy Living In Chicago And Northern …