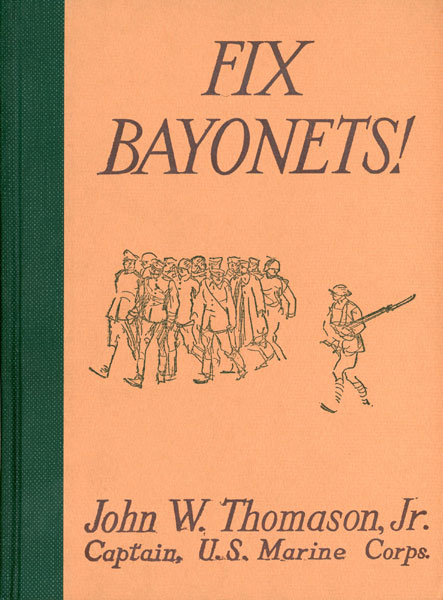 First edition. 8vo. Two-tone cloth and pic. boards, xxvi (2) -245 (1)p. "Songs Five" "Long Boy" follows p.246. (3). frontispiece (color) introduction, numerous illustrations by the author. John W. Thomason Jr. was an accomplished artist and author of several books; however, his true lifelong profession was as a Marine Corps officer. He served during WWI in the 49th Company of the 1st Battalion, 5th Regiment. His first combat action came at Belleau Wood. This book, long celebrated as the single finest account of Americans in battle in World War I, is a vivid depiction of US soldiers' lives in and out of battle on the Western Front during the final months of 1918 before the Armistice. The impact of the novel is considerably augmented by the author's numerous sketches and drawings of the soldiers, done contemporaneously on and near the battlefields portrayed in the book. This is not a history book, but an exceptional account of WW1 soldiers at the front, simply and eloquently recounted without melodrama or sentimentality. An extraordinary copy, with original watercolor that appears on p.51 tipped into the front of the book, along with an original autographed letter, signed, from Thomason referring to the illustrations and the originals from which they have been adopted. A virtually new copy, with only the bookplate of Mitchell S. Buck, to whom all the correspondence was directed; otherwise crisp and without any wear. Protected in an elaborate, custom-made half morocco slipcase.

There Is Something To See Along The Frisco …
SNYDER, BRIAN, GENERAL PASSENGER AGENT [ST. LOUIS & SAN FRANCISCO RAILROAD]

Cowboys North And South
WILL JAMES