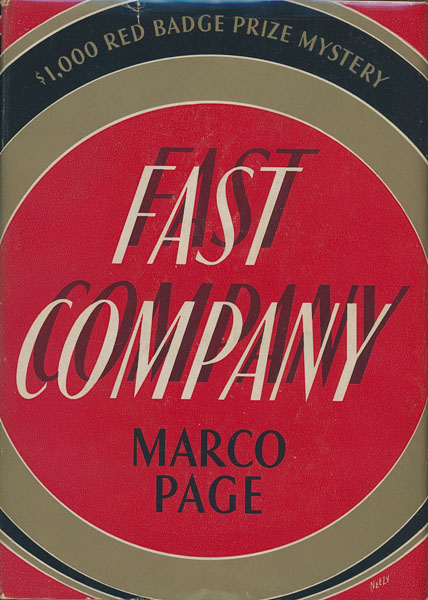 Other works by MARCO PAGE

First edition. Pseudonym of Harry Kurnitz. His first novel. Inscribed by the author on the verso of the half title page: "For Evelyn Topp / a genuine first edition / with the author's sincere regards / Marco Page." Fine, bright, square copy in a bright, fresh dust jacket with minor wear to the spine ends and a couple of minor nicks to the extremities neatly repaired with cellophane tape on the verso. A rare book dealer (said to have been based on Ben Abramson, the first publisher of The Baker Street Journal), is murdered, and the investigation leads through the arcane and fascinating world of rare books. The novel was made into the 1938 MGM movie, Fast One, directed by Edward Buzzell and starred Melvyn Douglas, Florence Rice, Claire Dodd, and Louis Calhern. Page co-wrote the screenplay for Fast One. A husband and wife team who are rare book dealers and also part-time detectives. The film became the first of a short-lived series of films featuring the bibliodetective couple developed by MGM to fill the gaps between releases of the "Thin Man" movies. The pair were later portrayed by Robert Montgomery and Rosalind Russell in "Fast and Loose" (1939) and by Franchot Tone and Ann Southern in "Fast and Furious" (also 1939). All three screenplays were written by Page, a former reporter who, under both this pseudonym and his real name of Harry Kurnitz went on to have a long and successful career as a screenwriter. This is an exceptional copy housed in a cloth clamshell case with leather spine labels and the titles stamped in gilt.

Violent Screen. A Critic's 13 Years On The …
STEPHEN HUNTER