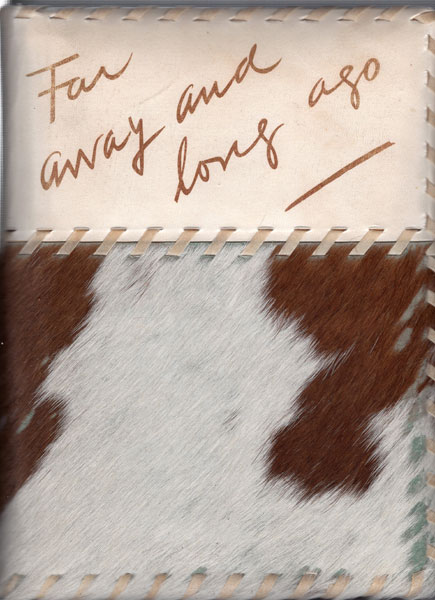 Far Away And Long Ago (A History Of My Early Life).

Publication: Printed For The Members of the Limited Editions Club By Guillermo Kraft Ltda, 1943, Buenos Aires

First edition. Thick quarto. Horse hide (partially with hair side out). Leather end sheets, "Introduction" by R.B. Cunninghame Graham, designed by Alberto Kraft, 32 full-page illustrations by Raul Rosarivo. Limited Editions Club of 1500 numbered copies, of which this is no. 326. Signed by Kraft and Rosarivo. William H. Hudson was an Englishman and a splendid writer of such stories as The Purple Land, Green Mansions, El Ombu, The Hind In Richmond Park, and Birds In London. Hudson was born in Argentina in the early 1880's, and spent a great deal of time on his horse Zango, living his life on the Pampas of Argentina. In his introduction R. B. Cunninghame Graham says, "No one, not even Argentines writing of their own country in their native tongue, have written of the Pampa better (or as well) as Hudson, who left it when it was almost untouched since the creation of the world, some sixty years ago, never again to see it, and to pass his life in Bayswater." J. Frank Dobie writes, "No combination of knowledge, sympathy, imagination, and craftsmanship has produced stories and sketches about the cowboy equal to those on the gaucho by W.H. Hudson, especially in Tales of the Pampas and Far Away and Long Ago, and by R. B. Cunninghame Graham, whose writings are dispersed and difficult to come by." Much sought. Fine, bright, tight copy housed in the original cardboard carton which is in used condition with much tape reinforcement but complete.

Letter From The Acting Secretary Of The Interior, …
by Mr. Stockbridge