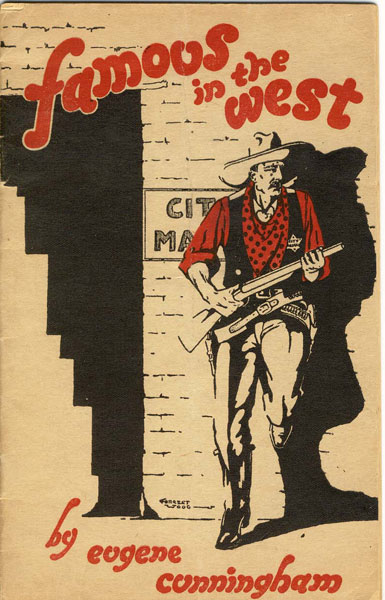 Famous In The West

First edition. [6]. 25 [1]pp., some photographic illustrations. 12mo. Original beige pictorial wrappers printed in red and black, [4], 25 [1] pp., foreword, illustrated, brands, advertisements. Chapters on Jim Gillett, Frontiersman, cowboy, Texas Ranger and Marshall of El Paso; Dallas Stoudenmire, El Paso's Marshall; Billy the Kid, who died with his boots off; John Wesley Hardin, a preacher's son, super killer and lawyer; and Tom Threepersons, a Northwest Mounty, champion cowboy and border peace officer. Burs 102: "In this rare little booklet is a chapter on Billy the Kid." Dykes, Kid 111. Guns 529: "Exceedingly rare.... Originally published as an advertisement to be distributed by a firm dealing with cowboy style clothes. It is said to have been published in an edition of 60,000 copies, but when the dealer discovered how much postage it would take to distribute them, he gave up the idea and destroyed most of the copies. The author tells about the Texas Rangers and the outlaws of the Southwest."---Rader 999. Light vertical crease and with minor wear to the spine ends and minimal wear to the extremities.

The Township Of Two Creeks
by Joseph Frank Wojta