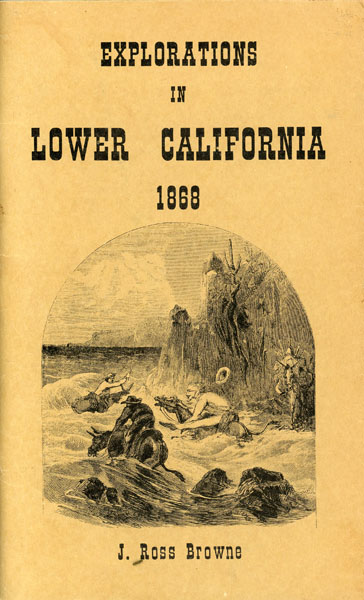 Other works by J. ROSS BROWNE

First edition thus. 8vo. Originally published in 1868 by Harper's New Monthly Magazine from original bound volumes in three parts. The entire article as originally published, with nothing changed, is reprinted. Pictorial wrappers, [8], 577-591 pp., PART II: 740-752 pp., PART III: 9-23 pp., double column, frontis. [portrait], publisher'note, illustrated, plates, portraits. At the time this was written, citizens of Arizona Territory, California, and Captains of Industry were all interested in Lower California, as well as the states of Sonora, Cinaloa, and Chihuahua, Mexico. All saw opportunity for wealth in the form of minerals and lands, saw a port for Arizona which would eliminate the necessity of desert travel and commerce between California and Arizona. The U.S. government was urged to purchase these portions of Mexico by these factions, and propaganda concerning the disputed regions was rife. Browne's report on Lower California was shrewd, accurate, and to the point. The bulk of his testimony cannot be denied, even today. Fine copy.

Hell With The Fire Out, A History Of …
ARTHUR QUINN