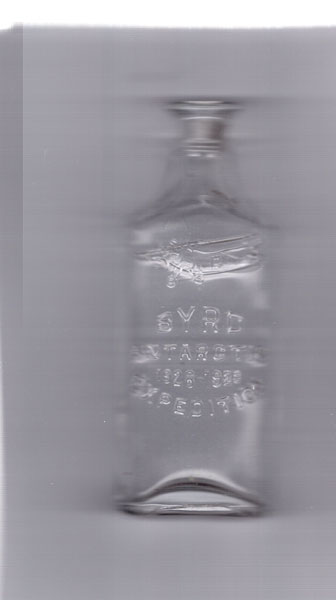 Other works by RICHARD BYRD

First issue. 14.5 x 5.5 x 3.5 cm [5 5/8" x 2 3/8" x 1 1/4"] small clear glass bottle with a flat back and with a curved front panel. Impressed on the surface of the glass is an image of an aircraft of that day and time along with a title and date Byrd Antarctic Expedition, 1928-1929. 500 of these bottles were made for the first Byrd Antarctic Expedition of 1928 -1929 by Owens-Illinois Glass Company of Toledo, Ohio. They were intended to help measure ocean current strength and direction by writing a note giving the point of release and sealing the information in the bottle. After the bottle was found, the location was recorded and its drift could be determined. By the very nature of the experiment very few of the bottles were recovered and this example shows virtually no wear at all and perhaps was never used for the experiment. This is the only example of the experiment we have ever encountered for sale. A wonderful artifact that was associated with an important exploration venture. Fine, unused condition.