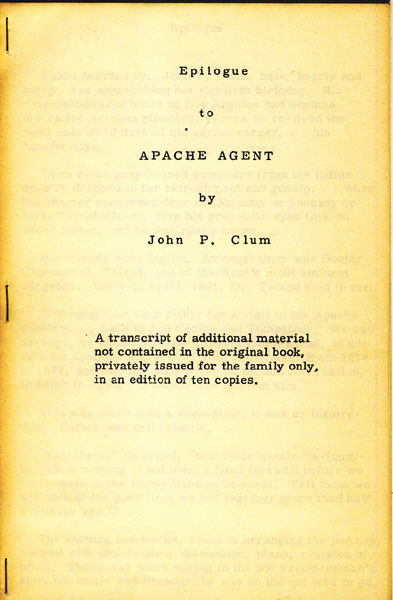 Epilogue To Apache Agent. A Transcript Of Additional Material Not Contained In The Original Book, Privately Issued For The Family Only, In An Edition Of Ten Copies

First edition. Limited to ten copies privately issued for the family only. 14 pages of text plus title page, stapled at spine. An integral part of the book Apache Agent by Woodworth Clum as it contains additional material not contained in the original trade edition of the book. A total of ten original mimeographed copies were produced for the family only of John P. Clum. "Years hurried by, John P. Clum, hale, hearty and happy, was approaching his eightieth birthday.... when some grey-haired compadre from the Indian country dropped in for refreshment and gossip..." A fascinating account of Clum's return to San Carlos and Tombstone. Light tanning at spine, else a fine copy.

The Western Traveler's Pocket Directory And Stranger's Guide; …
by Anonymous