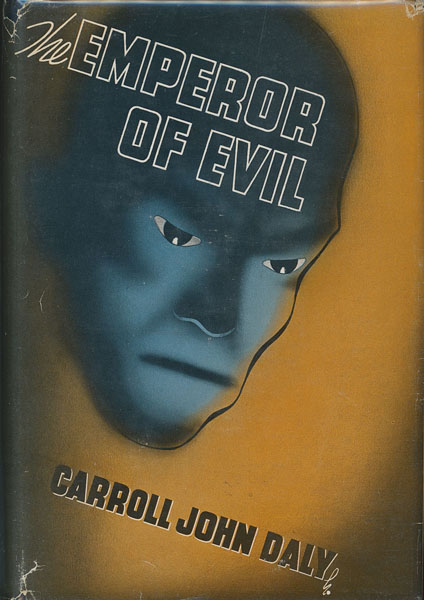 Other works by CARROLL JOHN DALY

First edition. Inscribed and dated on the front free fly leaf June 14, 1939 / For Betty Eisner / my partner in crime / Carroll John Daly. Betty Grover Eisner was Daly's longtime secretary. Fine, bright copy in bright and crisp dust jacket with light wear to the spine ends and corners, with some tiny nicks and closed tears to the extremities. The second mystery novel features detective Vee (Vivian) Brown who takes on the Black Death organization. Private eye, Vee Brown ... AKA the Crime Machine ... battles with his greatest nemesis, the Emperor of Evil. Vivian “Vee” Brown leads two lives. Delicate-looking and small in stature, he lacks physical strength and endurance, but that doesn’t prevent him from being an effective special operative to the Manhattan District Attorney. In this capacity he often ignores the legal niceties of due process, shooting first and asking questions later. Many citizens view him as a hair-trigger gunman whose killings make him little better than the vicious criminals he hunts. In his other life, Brown lives in a luxurious Park Avenue penthouse, paid for with the royalties he earns as a phenomenally successful composer of sentimental songs ... a sideline he keeps secret. Both the police and the underworld refer to him as a "Killer of Men."

The Day Of The Jackal.
FREDERICK FORSYTH