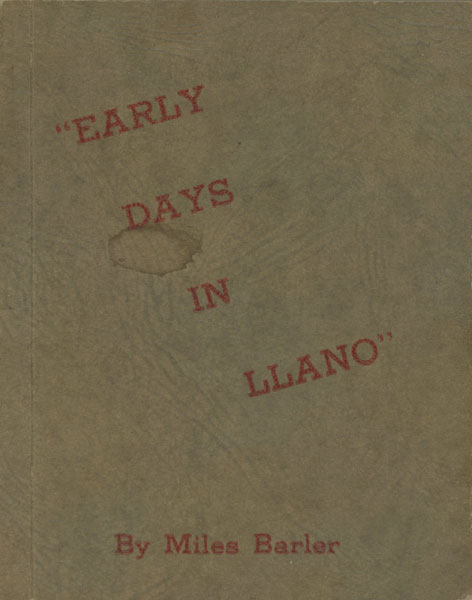 Later edition. 12mo. Originally published in 1898 and again in 1905. This edition published about 1908. Stiff wrappers, titles printed in red on the front cover., 76 pp. The author's personal reminiscences of his life as a merchant, deputy sheriff and Texas Ranger. This work was originally published as a series of articles in the Llano Times, and published as a collected volume in 1905. Miles Barler was born in Ohio in 1833, one of five children. His parents both died by the time he was eleven, and by 1850 he had made his way to Bastrop County, The author settled in Llano in 1857, bringing with him a hundred head of cattle from Bastrop County. He served in the Confederate Army during the war, and after became a Texas Ranger. His adventures include encounters with Indians, cow thieves, and general outlaws, and make for an entertaining read. Scarce; OCLC locates copies only in a few Texas institutions. Any of the three editions are considered very scarce to rare today. Tiny water spot to front cover, else a near fine copy.

J. B. "Billy" Mathews. Biography Of A Lincoln …
by Elvis E. Fleming