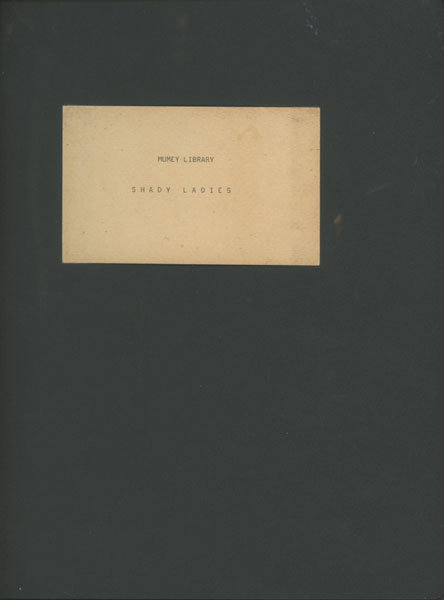 Other works by DR. NOLIE MUMEY

Black three ring 11 1/2" x 10" notebook binder with eighteen 11" x 9 1/4" transparent plastic pages each containing information about Denver's "Shady Ladies." Nolie Mumey was a noted Western historian and author and he maintained this information on some of Denver's more noted "madams." There are photographs and information on Laura Evans (4), Lillian Powers (2), French Blanche (1), but the primary focus of this research collection is about Mattie Silks. Mattie Silks and her famed bordello, the House of Mirrors was located at 1942 Market Street, Denver, Colorado. "She became known as the undisputed, 'Queen of Denver's Red Light District' in the late 1800s. Her girls were known to possess 'the prettiest of faces, the tiniest of waists, the creamiest of bosoms, the daintiest of giggles, the best of conversational skills, the most imaginative of techniques, the perkiest of personalities.' In the early 1900s, Mattie bought the most famous 'parlour house' in Denver at the death of its other legendary madam, Jennie Rogers. This 'House of Mirrors' was described as perfect for the dynamic Mattie, with its doorposts carved to represent phallic symbols, its floor-to-ceiling glass mirrors, its chandelier of glass-faceted prisms." From 1877 to 1897 her brothel was the most successful in Denver. There are 3 photographs of Mattie, including one of her family and of her pictured as a young girl along with photographs of the "House of Mirrors," including various portions of the house to include the interior, the exterior, and the tiled doorsill with the words "M SILKS." A number of newspaper and magazine articles about Mattie Silks are provided and a copy of the booklet authored by Caroline Bancroft "Six Racy Madams Of Colorado," which contains sections on Mattie Silks, Laura Evans, Lillian Powers, and others. Many of the photographs are done by Fred M. Mazzulla, a Western historian and photographer. Also included are some listings of the addresses of many of the "boarding houses, Mattie Silks' business card, and a modern facsimile coin ("Good for One Screw") from The Silver Dollar Hotel in Denver. The front cover has a label with the words in type "Mumey Library / Shady Ladies." Contents well-protected and in near fine to very good condition.

The Partisan Rangers Of The Confederate States Army.
DAVIS, WILLIAM J. [EDITED BY].