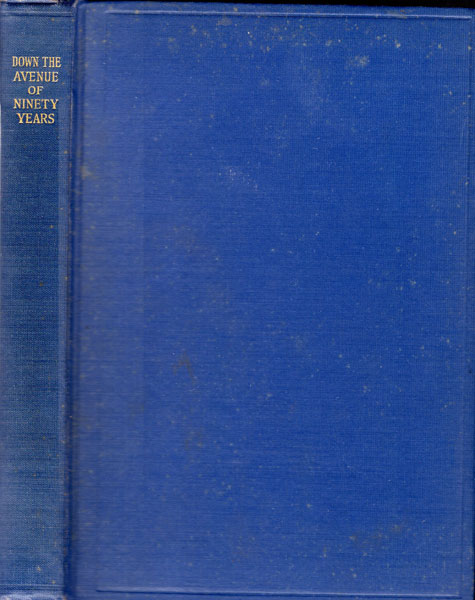 Down The Avenue Of Ninety Years. Reminiscences Of Martha Campbell Vivian

First edition. 8vo. Blue cloth, titles stamped in gilt on the spine, [14], 137 [1] pp., frontispiece [portrait of the author], with twenty illustrations from daguerreotypes and photographs, portraits. Reminiscences of life in Missouri. until 1858, then on to Texas from Missouri in 1858 by wagon. Much on Civil War days in Missouri. Six Guns 2275 says "Rare." "The author, a southern girl, condemns the Kansas Redlegs and says: 'It was men of this sort who drove the James boys from their home, pillaged it, and committed other atrocities on them and their parents. The James boys could not get to the Southern Army and were prosecuted and hunted, their home destroyed and their lives attempted to make an honest living. I think these facts should be borne in mind before we too severely condemn Jesse James and his brothers [sic] for their acts of outlawry." Six Guns 2275 also says "Published in an edition of 300 copies." Fine, tight copy.