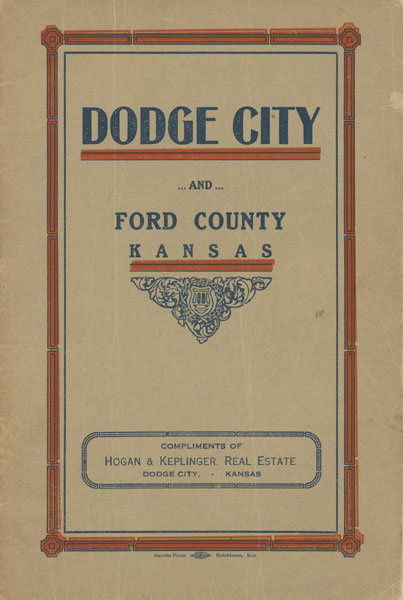 Dodge City And Ford County, Kansas. A History Of The Old And A Story Of The New

First edition. 8vo. Original color-printed gray stapled wrappers with title printed in blue and orange on the front cover, 40 pp., frontispiece [photograph of the Famous Dodge City Cowboy Band], illustrated from photographs. Being a souvenir-type booklet with a photographic illustration on almost every page. Touching on many aspects of life in Dodge City, Kansas in the early 20th Century. There are a number of farming scenes along with a few businesses and private residences. There are two photographs specifically featuring people: “The Famous Dodge City Cowboy Band . . .” and “A Group of Indian Chiefs Captured After One of the Last of the Cattle Raids Near Dodge City, and one showing a reproduction of the lock with which Larry Digger imprisoned Bat Masterson, the Great "Newspaper Idol" of the early days in the great Southwest. The first part of the booklet is dedicated to the history of Dodge City and Ford County. The second part focuses on many aspects of life in Dodge City such as the climate, schools and churches, social organizations, industry and opportunity. A rare booklet, apparently unknown to Adams and other relevant bibliographies. Pages 19-22 detached from staples, faint vertical creases to the front cover, a tiny nick to the fore-edge of the front cover, else a very good copy with covers lightly used.

Bottles Of Bygone Days. A Guide Book Of …
by Donald E. Colcleaser

Adventures Of A Ballad Hunter.
by John A. Lomax