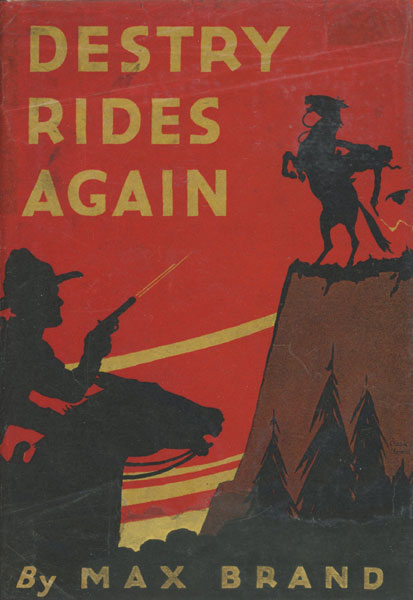 First edition. One of the many pseudonyms of Frederick Schiller Faust. Spine a bit darkened else a near fine, bright copy in dust jacket with professional restoration to the spine ends, corners and extremities. One of the better known westerns written by Brand and it was made into a movie of the same name in 1932 and starred Tom Mix, Claudia Dell, and Zazu Pitts. It was again made in to a movie in 1939 that starred Marlene Dietrich, James Stewart, and Mischa Auer. Chester Bent, who claims to be a friend of Harry Destry, frames Destry and has men testify against him. Found guilty, he vows to return. Back from prison he goes after the man that framed him. When the Sheriff is shot before he can talk, Destry chases down the killer and learning Bent is the man who betrayed him, heads out to get him. An exceptional copy of a classic western novel.

Eloquence From A Silent World, A Descriptive Bibliography …
by Richard L Saunders

Bisbee Is The Name
by Ben T. Traywick

The Heraldry Of The Range.
by J. Evetts. Haley