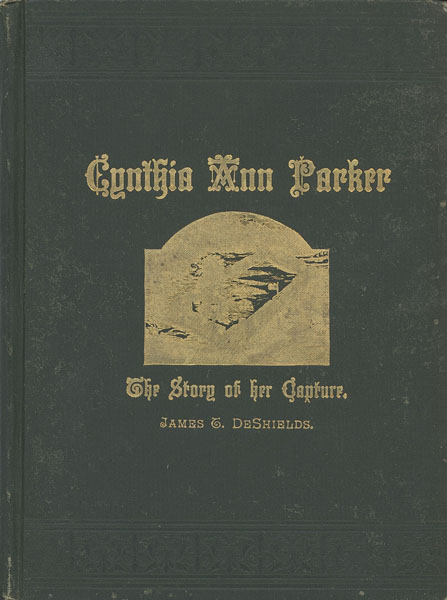 Cynthia Ann Parker: The Story Of Her Capture

Other works by JAMES T. DESHIELDS

First edition. Cloth, 80 pp., 3 plates, preface. Born in Clark County, Illinois in 1827, Cynthia Ann Parker came to Texas in 1832 with her family, who built Fort Parker near present-day Mexia, Texas. In May of 1836, the carelessly defended Fort was attacked by an Indian party comprised of several hundred Comanches, Kiowas, and Kichais (Caddo). The Indians killed 5, and captured 9 year old Cynthia Ann Parker and 4 others. The Indians split up 6 days later and Cynthia Ann was taken by a Quahadi Comanche party beginning 25 years of life among the Comanches. At various times from 1840 through the 1850's Cynthia Ann was seen by various traders who all reported that she was happy and fully content living with the Comanches. During the 1840's she married Peta Nocona, a warrior who had led the attack on Fort Parker. Their marriage produced 2 sons and a daughter. One son, Quanah Parker became the last great Chief of the Comanche tribe. In December, 1860, Cynthia Ann was "rescued" when a Ranger force led by Sul Ross attacked a Comanche village at the Battle of Pease River. Cynthia Ann and her daughter were taken by the Rangers to Camp Cooper where they were held until they were positively identified by Cynthia Ann's uncle, Col. Issac Parker. For the next 10 years she lived a sad and miserable life of continual efforts by others to rehabilitate her into white frontier life. On numerous occasions Cynthia Ann tried to run away to rejoin her husband and sons, but was never successful. She died of influenza in 1870, weakened by self-imposed starvation. This very scarce work is a classic of tragedy on the Texas Frontier. A bright, attractive copy in near fine condition.