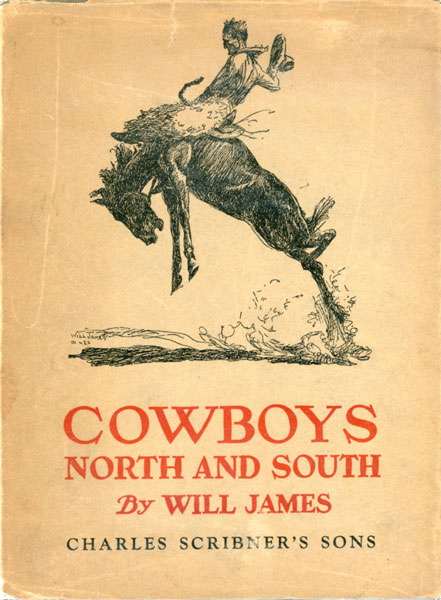 Other works by WILL JAMES

First edition, second printing. 8vo. Decorated cloth, titles stamped in black on the front cover and spine, Signed and dated by the author on the front free fly leaf, xvii [blank], 217 pp., preface, illustrated by the author. The author's first book, considered his best one, is a series of short stories about cowboy life in the West as it truly was between the 1870s and the early years of the 20th century. "The best one is his first, written before he became sophisticated with life - without becoming in the right way more sophisticated with life - without becoming in the right way more sophisticated in the arts of drawing and writing." - Dobie pg. 108. According to Frazier, between 1919 and Will James' death in 1942, he changed the signature he used professionally over a dozen times. When signing his name in, James most often included the '111' and the date with his signature up through 1927. This copy was so signed in 1926. Fine, bright copy in dust jacket with light wear to the foot of spine, a chip to the top edge of the rear cover and a small hole (5/8" x 1/4") to rear cover and a few tiny closed tears and light wear to the extremities and corners. According to Don Frazier this copy is exactly like the first printing with the exception of the 1925 date which appears on the title page.

Where The Money Is.
IVAN G. GOLDMAN

Time Is A Killer
MICHEL BUSSI