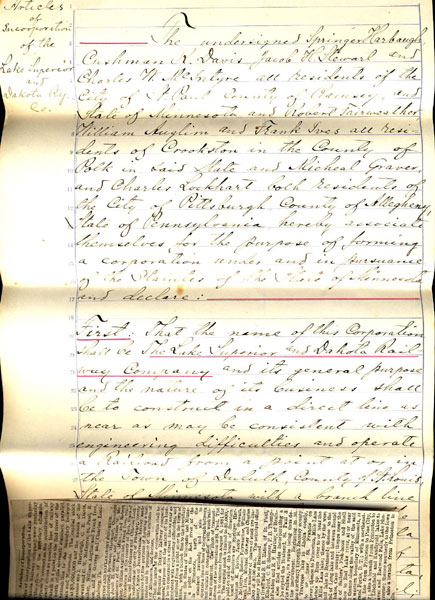 Copy Of The Articles Of Incorporation, Of The Lake Superior And Dakota Railway Co.

Other works by Lake Superior And Dakota Railway Co

13-3/4" x 8-1/2." 6 pp. Legible handwritten document, in ink, incorporating the Lake Superior & Dakota Railway Company, dated 8 August 1881. Document states that Springer Harbaugh, Cushman K. Davis, Jacob H. Stewart and Charles W. McIntyre, residents of St. Paul, Minn., and Robert Fairweather, William Anglim and Frank Ives, residents of Crookston in the county of Polk, State of Minnesota, and Michael Graver and Charles Lockhart, both residents of the city of Pittsburg, county of Allegheny, State of Pennsylvania, hereby, "associate themselves for the purpose of forming a corporation under and in pursuance of the statutes of the State of Minnesota, and declare, First - that the name of the corporation shall be The Lake Superior & Dakota Railway company, and its general purpose and the nature of its business shall be to construct in a direct line as near as may be consistent with engineering difficulties, and operate a railroad from a point at or in the town of Duluth, Minn., with a branch line to the boundary line between the States of Wisconsin and Minnesota to a point on the Red river of the North in Minnesota, north of the eleventh standard parallel; and also to erect and operate a line or lines of telegraph between said terminal points in connection with such railroads as it may construct." Although the document is very legible, newspaper article transcribes the documents, though not word for word. A notary seal is on the last page with the following stated: "State of Minnesota, Department of State, I hereby certify that the within Instrument was filed for record in this office on the 8th day of August A.D. 1881 at 2:10 o'clock P.M. and was duly recorded in Books F of Incorporations on pages 314,315,316,& 317. Signed by Fred von Baumbach, Secretary of State."