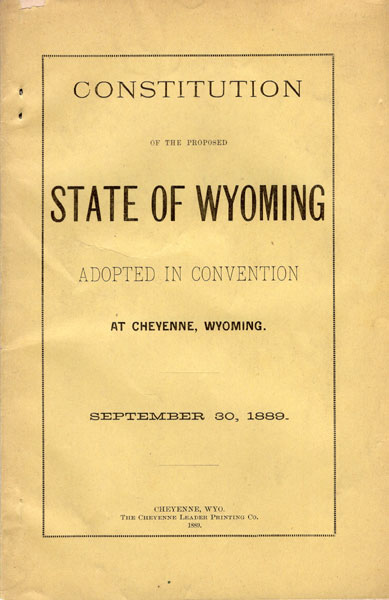 Constitution Of The Proposed State Of Wyoming Adopted In Convention At Cheyenne, Wyoming. September 30, 1889

by State Of Wyoming

First edition, second issue (with the Ordinances followed by the printed list of delegates on page 56). 21.3 x 14.2 cm. [8 3/8" x 5 5/8"], yellow wrappers printed in black. Collation: Leaf of title (verso blank), Constitution on pp. [3]-53 (verso blank); Address to the People on pp. [57]-60; 2 blank leaves. In December 1869, Wyoming Territory became the first organized territory in the modern world to codify the right of women to vote and hold office. In 1889, the proposed state of Wyoming enacted a constitution with universal suffrage. Article VI, Section 1 (page 24) reads: "The rights of citizens of the State of Wyoming to vote and hold office shall not be denied or abridged on account of sex. Both male and female citizens of this state shall equally enjoy all civil, political and religious rights and privileges." Wyoming was admitted to the Union on July 10, 1890. Both Utah and Washington quickly followed Wyoming's lead, but it would be another thirty years before women's suffrage was enacted at the federal level. A single minute chip from the top edge of the upper from cover, else fine or better and rare thus. Housed in a yellowish cloth clamshell case with a leather label on the spine and titles stamped in gold gilt.

Conquest Of The Southern Plains, Uncensored Narrative Of …
by Charles J Brill

Panorama Of Denver No. 5, Photograph
by William Henry Jackson

The Trail. A Cattle Drive From Corsicana, Texas …
by B. G. Mckie