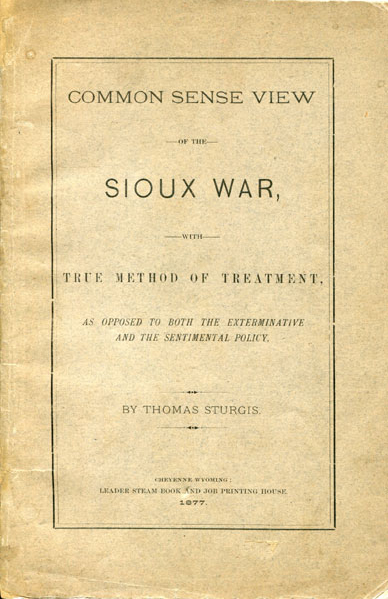 Common Sense View Of The Sioux War, With True Method Of Treatment, As Opposed To Both The Exterminative And The Sentimental Policy

First edition. 8vo. Original tan, printed wrappers, 52 pp., Sturgis, a Wyoming ranchman, cites the recent depredations of the Sioux under Red Cloud, Spotted Tail, and others, and the consequent loss of lives and property among the whites. He attacks the recent Indian Treaties, gives some account of General Crook, Custer. and Merritt's campaigns; and he recommends, finally that all Indian Agencies be transferred to the War Department presently under the Interior Department. His pamphlet is written in a series of five articles written at Cheyenne from July 10 to September 8, 1876. Sturgis was on the ground, knew whereof he spoke and his account of the war and the massacre, and his suggestions for the handling of the situation are clear and sagacious. Not in Graff or Streeter Sale. Stopka Wyoming Territorial Imprints 1877.4 locates only six copies. A desirable and important Wyoming imprint in fine condition and laid into a four-point cloth, folding case with leather label on the spine and titles stamped in gold gilt.

Directory Of The City Of Detroit; And Register …
by James H. Wellings