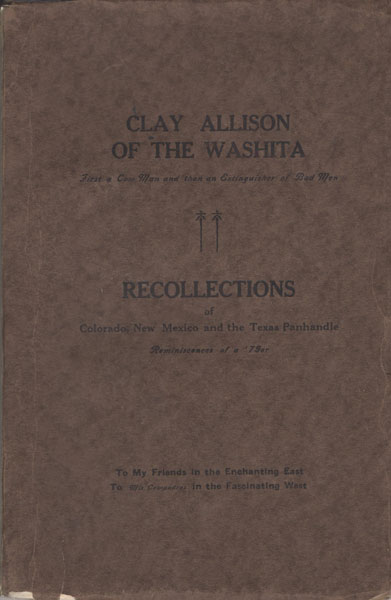 Clay Allison Of The Washita, First A Cowman Then An Extinguisher Of Bad Men. Recollections Of Colorado, New Mexico And The Texas Panhandle

Other works by O. S. CLARK

First edition thus. 8vo. Printed wrappers, 135 pp., frontispiece, plates, portraits, map. Originally published in 1920, in an edition containing 38 pages and considered to be "exceedingly rare" by Adams 150 #29. This 1922 edition is very scarce to rare and is much more commonly thought to be the true first edition. Six Guns 430 says, "Although this book has the same title as the 1920 edition, it contains much added material by other writers, as well as illustrations and a map not included in the 1920 edition. This edition has also become rather scarce and is the only one known to many bibliophiles. It contains an introduction not included in the first edition, and the author also names his two trail companions, which he failed to do in the first edition. Paragraphing and wording of material from the 1920 edition are identical. This book has some material on the big fight at Tascosa, Texas." Billy the Kid, Billy Dixon and the Buffalo Wallow fight, John W. Poe, etc. "The author tells his experiences in meeting Clay Allison on the trail and of some of Allison's subsequent killings." This copy is complete and is in very good condition. Preserved in a clamshell case, with titles stamped in gilt on the spine.

My Life As An Illustrator In The Southwest.
JOSE CISNEROS

Annual Review Of The Iron Mining And Other …
A. P. SWINEFORD

Life Of The Marlows. A True Story Of …
RATHMELL, WILLIAM [REVISED BY]