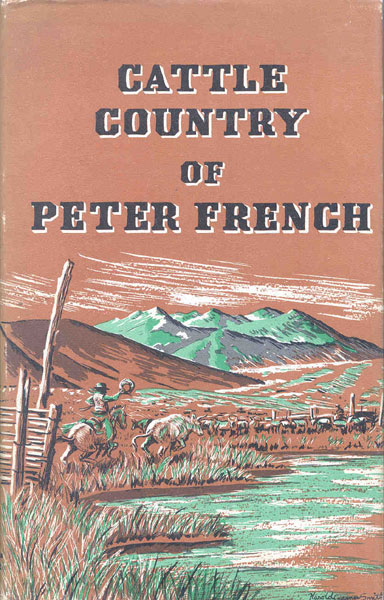 First edition. Dec. cloth, maps on end-sheets, 167(1)pp. Illus. from photos, index. A well-researched account of the life of this famous early Oregon rancher. Peter French left home as a teenager and was hired by Hugh Glenn, the largest wheat grower in California. In 1872 Glenn sent French to establish a cattle ranch in Oregon, in exchange for partial ownership. French drove 1,200 cattle north to Harney County. There he bought a small ranch from a discouraged rancher and began to expand his operation. He controlled the Donner und Blitzen Valley between the Steens Mountains and Malheur Lake, along with Happy and Diamond Valleys and parts of Catlow Valley. French’s employees liked him, but his neighbors did not. French fenced 30,000 acres of the public domain and between 1882 and 1889 fraudulently bought 16,000 acres of land claimed from the public domain by his employees. Ed Oliver, who owned a small piece of land completely surrounded by French’s land, asked the county court to grant a road easement through French’s property. The court allowed the road to be surveyed, but in November French responded by suing the county for the removal of the road. On December 26, 1897, Ed Oliver approached Peter French on horseback. French rode out to meet him. Oliver responded by charging his horse into French. French then struck Oliver and his horse with a willow whip. Oliver drew a gun. French turned and rode away. Oliver followed him for a few seconds and then shot French dead. After French’s murder, a Harney County jury acquitted Oliver, citing self defense. Fine in dust jacket with map laid-in. Signed.

Croutons On A Cow-Pie. Volume Ii
by Baxter Black