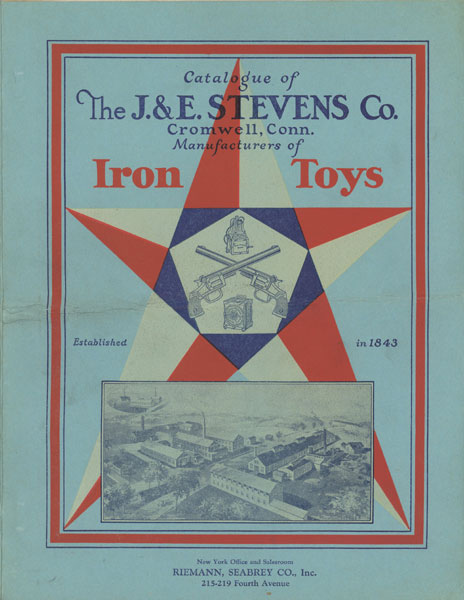 Color pictorial wrappers, n. p. [20 pp.], illustrated. Quarto. The company say that they are "Manufacturers of Cast Iron Pistols and Toys" and devote eight full pages to cap pistols and eight full pages to cast iron banks, mechanical banks, and cooking ranges. Two pages are devoted to fruit jar cap removal device, small iron tools and jack stones more commonly known as "jacks." Price lists for all manufactured items are included along with terms of sale along with charges for orders less than minimum quantity. J. & E. Stevens was a business in Cromwell, Connecticut formed by John and Elisha Stevens in 1843 to make cast-iron hardware, hammers, and iron toys. The success of their toy products, including cap guns, led to a refocus on toys. The company made a wide variety of toys for boys and girls during its more than 100 year history. The company employed many designers and produced dozens of banks. Their mechanical banks included a "Tammany" bank featuring a heavy-set dressed up politician who puts an introduced coin into his pocket (Tammany Hall). The business was bought out by Buckley Brothers, a New York company, in 1950. One of their animated banks featuring a hunter and lion appeared on Antiques Roadshow. The University of Connecticut has a collection of the company's papers. Horizontal crease across the center of the entire booklet else a very good copy.