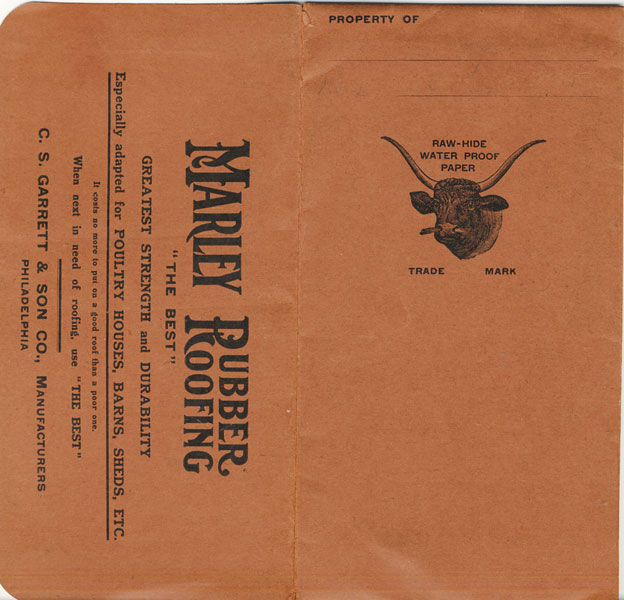 7 1/2" x 4" burnt orange envelope with trademark picture of a long-horned snorting steer on the front of the envelope; "MARLEY RUBBER ROOFING "THE BEST." Greatest Strength and Durability. Especially adapted for Poultry Houses, Barns, Sheds, Etc. It costs no more to put on a good roof than a poor one. When next in need of roofing, use "THE BEST." C.S. GARRETT & SON CO., MANUFACTURERS. PHILADELPHIA on the flap of the envelope. Inside envelope offers listing of their various products along with a statement saying that, "This Wallet is made of Garrett's 7 1/2" RED ROPE Waterproof Paper." Contains five different information brochures on various products to include Pyramid Cement, Garrettite Red and Green Slate Covered Strip Shingles, Garrettite Sale Surface Roofing, Garrettite Roll Shingle Roofing, and Tilo-Kote (distributors). Each brochure offers information about the product and also directions for application. "The firm of C. S. Garrett, Brother & Co. was established in 1851 and continued in operation until 1873, when Sylvester Garrett (one of two brothers) withdrew his interest from the operation. The other brother, Casper S. Garrett continued in individual control of the then intensive trade until 1878, when he admitted into partnership his only son, William Garrett, giving him an interest in the firm, which was since known as C. S. Garrett & Son. Under the well directed efforts of both father and son, the trade of this well known house has attained considerable magnitude, and the name of the firm has been regarded for many years as synonymous with integrity and straightforward business methods." C. S. Garrett & Son Co manufactured a line of waterproofing and insulating papers shown and described in sample books. A staple of the company was their “raw-hide” waterproof paper, made from Manila and jute fiber, and saturated with a patented waterproof composition. This paper was especially adapted to all kinds of outside work, and when painted made a serviceable and water-resisting roof. Brochures and envelope are lightly soiled and with light wear to the extremities. Very good. A nice item.

Portland And The Wonderful State Of Oregon In …
Portland Chamber Of Commerce, Portland, Oregon

Phoenix Arizona In The Valley Of The Sun