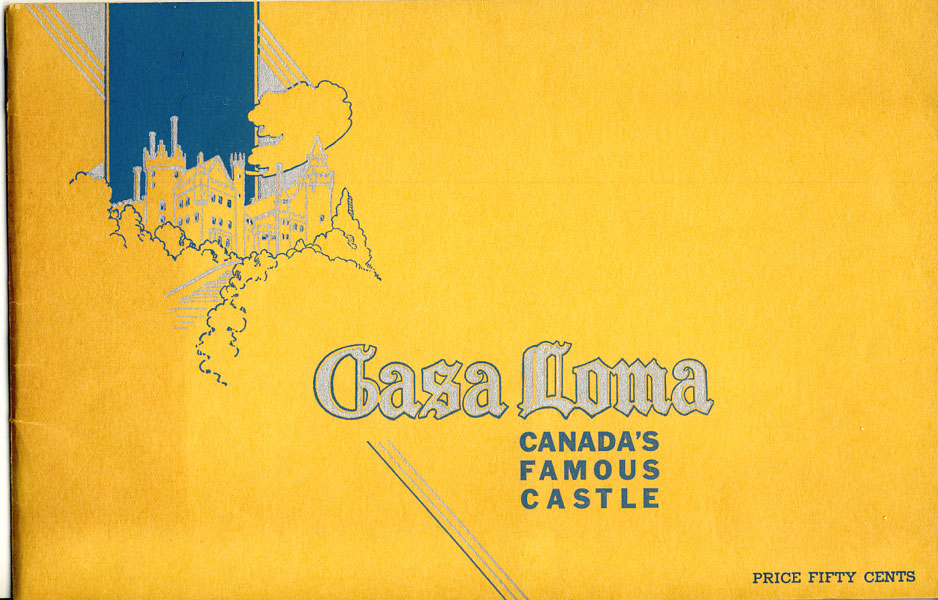 6" x 9" in pictorial wrappers with a small illustration of the castle printed in blue and silver at the top left corner of the front wrapper. 32 pp., illustrations. Casa Loma was originally a residence for financier Sir Henry Mill Pellatt and was constructed by a team of 300 workers over a three-year period from 1911–1914 at a cost of approximately $3.5 million. Due to the start of World War I, construction on the house was halted. At 98 rooms covering 64,700 square feet it was the largest private residence in Canada. During the depression that followed World War One, the City of Toronto increased Casa Loma's annual property taxes from $600 per year to $1,000 a month, and Pellatt, already experiencing financial difficulties, was forced to auction off $1.5 million in art and $250,000 in furnishings. Pellet abandoned the house in 1923. The city seized Casa Loma in 1933 for $27,303 in back taxes. The castle was extremely run down and the city was motioning for the castle to be demolished. In 1937, however, it was leased by the Kiwanis Club of West Toronto, which began operating the castle as a tourist destination. Descriptions and photographs of the rooms include the interior and exterior views, the drawing room, the library, the dining room, the stables, the gardens, etc. At the top of the first page is neatly written Sept. 7, 1941. Edges of wrappers and pages lightly soiled and spine edge of front wrapper sunned. Very good. A very interesting booklet.

Statistics And Information Concerning The State Of Nebraska, ...
by H.C. [General Passenger And Ticket Agent Townsend