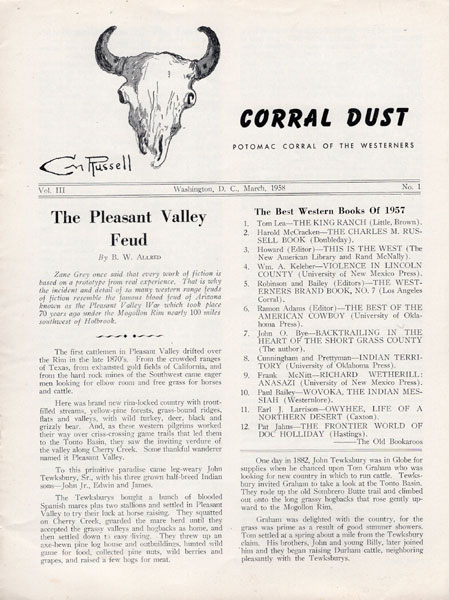 Carrington: The Valor Of Defeat.

First edition. Quarto. Vol. IV, No. 4, of Corral Dust. Printed wrappers, 8 pp. Biography of Col. Henry Carrington and his attempt to guard the Bozeman Trail in spite of the objections of the Sioux. Carrington was tasked with building the most important Army outpost guarding the Bozeman Trail, Fort Phil Kearny. Carrington erected an imposing symbol of American military power with a tall wooden palisade surrounded a compound the size of three football fields, housing nearly 30 buildings. However, what Carrington did not take into account was the fact that the nearest stands of timber lay several miles away. To obtain the wood essential for heating and further construction, a detachment had to leave the confines of the fort every day. The Sioux Indians naturally began to prey on these "wood trains." Also includes an article written by Philip Rasch entitled, "The Chronicle of Jim McDaniels," a member of Jesse Evans Gang during New Mexico's Lincoln County War as well as an article written by Bill Allred entitled, "Nick Eggenhofer - Western Artists." Fine copy.

The Wild West Or, A History Of The …
by Don Russell