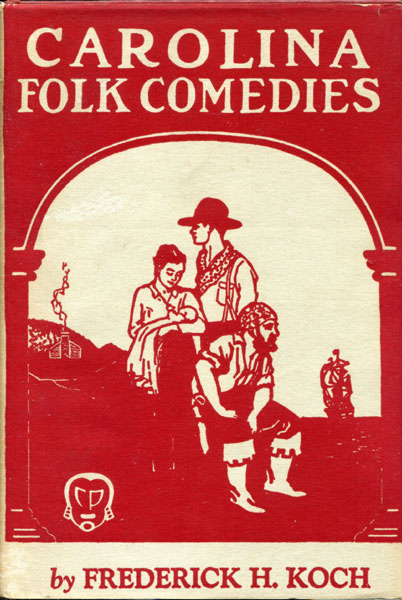 KOCH, FREDERICK H. [EDITED & WITH AN INTRODUCTION BY]

First edition. 8vo. Inked presentation inscription from the author to his son on his 18th birthday on the front fly leaf. Red cloth, titles stamped in gold gilt on the spine, xxxi [blank], 311 pp., frontispiece, Aims of The Carolina Playmakers, Adventures in Playmaking 1918-1931, foreword, illustrated from full-page photographs of original productions of the plays, appendices. Foreword by Archibald Henderson. "Starting in the 1920s, a burst of play-writing and acting creativity began in Chapel Hill and spread across the state. Professor Frederick Koch came to the University of North Carolina at Chapel Hill in 1918 for a special purpose: to get students there to write plays and act them out, not just to sit and watch. Koch called his student actors the Playmakers and their plays 'folk plays.' While 'folk' means 'people,' Koch didn’t have just any kind of people in mind. He meant farmers and others who didn’t live in big cities. He saw places like North Carolina (with lots of farms but not many towns) as gold mines of stories. He believed that people there lived as their parents, grandparents, and great-grandparents had lived, sharing a common way of life that the rest of the world was forgetting. By writing about 'the folk,' Koch thought, his students could show what was being lost." Most Carolina folk plays can be called either a comedy or a tragedy, regardless of which, audiences could "come see themselves." Eight plays are presented and all are comedies and original productions of the famous Carolina Playmakers. Bookplate of the author's son on the front pastedown sheet, red top edges are bright, overall a fine, bright copy in dust jacket, light faded on the spine.

The New Overland And Short Sea Route. From …
THE PLANT SYSTEM

The Thoen Stone: A Saga Of The Black …
FRANK THOMSON