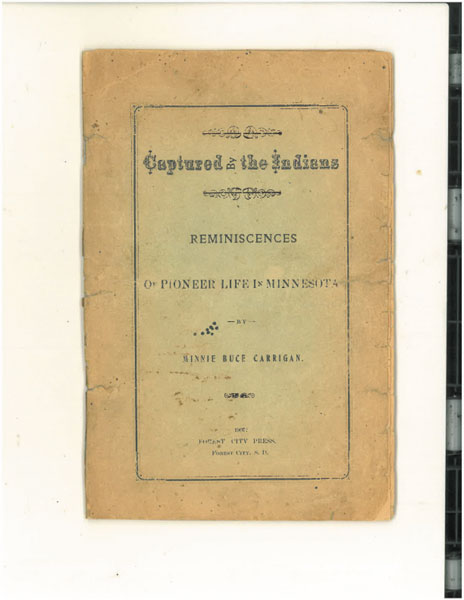 Captured By The Indians, Reminiscences Of Pioneer Life In Minnesota

First Edition. Printed Wrappers. [i-ii], [1]-40pp.[page 41 Vignette, page 42 Blank]. Portrait of author on verso of Title Page and vignette of memorial obelisk on page [41]. This work was originally published in serial form in the Buffalo Lake, Minnesota News during January, 1903. This very rare first edition, first issue has been unknown to many who reference the Buffalo Lake 1912 edition (Ayer, Supplement 28 and page 156, #1715 in The Americana Collection of Herschel Jones). This 1907 first edition was privately printed for friends, in a very small edition, as few copies have appeared on the rare book market, with only the 1912 edition appearing in auction records. This work is an important, first-hand narrative of the experiences of Minnie Buce Carrigan during the Sioux Uprising of 1862. On August 18, 1862, at age 7, Wilhelmina "Minnie" Buce witnessed the killing of her mother and father, and 3 of her sisters by Sioux Indians at her home in Flora Township, Renville County, Minnesota. Minnie was captured by these same Indians, along with her older brother and younger sister, and held captive until being freed several weeks later at Camp Release on September 26. She relates much regarding the killing of her family members and neighbors, as well as the cruelty, and ocassional kindness, that she witnessed and experienced during her captivity among many other captive women and children. Pages 25-40 relate the graphic and tragic details of the experiences of other neighbors and their families: Emanuel Reyff, J. G. Lane, Mrs. Ienefeldt, and Justina Boelter. Minor professional repair to short, closed tears to spine, and fore-edge of fragile wrappers and title page. Additional short, closed tears to fore-edge of several other pages, none affecting the text. A very good copy of a very rare work, in original wrappers; protected in an attractive clamshell box, with title in gilt on the spine.

Letter Of The Secretary Of War Communicating, In …
by William W Belknap

Memorial Of The Legislature Of Minnesota, In Favor …
by Thomas H. Armstrong