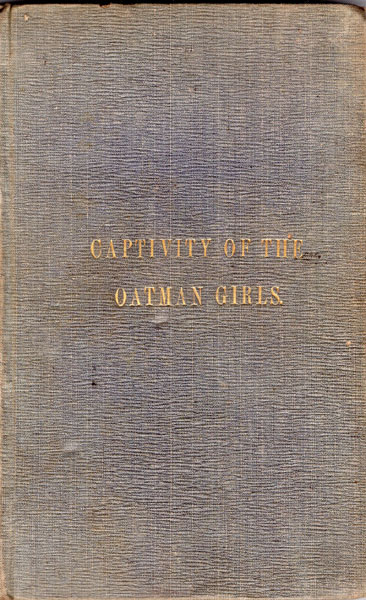 Captivity Of The Oatman Girls: Being An Interesting Narrative Of Life Among The Apache And Mohave Indians: Containing Also An Interesting Account Of The Massacre Of The Oatman Family, By The Apache Indians In 1851; The Narrow Escape Of Lorenzo D. Oatman; The Capture Of Olive A. And Mary A. Oatman; The Death By Starvation, Of The Latter; The Five Years Suffering And Captivity Of Olive A. Oatman; Also Her Singular Recapture In 1856; As Given By Lorenzo D. And Olive A. Oatman, The Only Surviving Members Of The Family To The Author

by R. B. Stratton

The Rare Second edition. 12mo. Contains a map that was not present in the rare first edition. Quarter leather and marbled paper over boards, 231 pp., preface, illustrated, map. The Oatman family was attacked while part of a Mormon train en route to California via the Old Santa Fe Route in 1851. Six members of the family were murdered, one of the sons left for dead, and Mary Ann and Olive were hauled away by the Apaches. Mary died while in captivity, and Olive was ransomed in 1856. She was extensively tattooed, and went on tour to describe her experiences and display her decorations. The first two editions of this work were issued in San Francisco in the same year, the first edition under the title "Life Among the Indians .......," and the second under the title as per above. The first edition is extremely rare, and the second only slightly less so. Housed in a clamshell case with titles stamped in gold gilt on the spine.

Billy The Kid. His Legacy In Guadalupe County
by Daniel B. Flores

A History Of The Comstock Silver Lode & …
by William). De Quille, Dan. (Wright