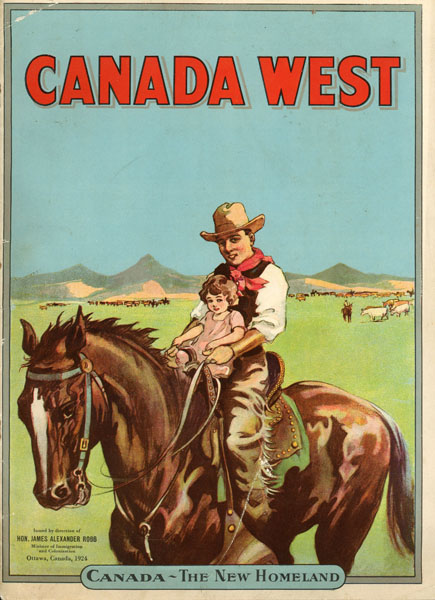 ROBB, HON JAMES ALEXANDER [ISSUED BY THE DIRECTION OF]

First edition. 8vo. Color pictorial wrappers, 40 pp., with over 100 text photographs, and border woodcut engraved illustrations, 4 double-page color maps of Manitoba, Saskatchewan, Alberta & British Columbia (2 four pp. fold-outs). Double column. Self-printed color-illustrated lithographed softcovers, with color tinted photograph of cowboy & child on front cover, and cattle herd & wheat field on back cover. First edition of this uncommon homestead land promotion for the lands in Western Canada in the years just after World War I. All public lands in Manitoba, Saskatchewan, Alberta, and British Columbia were administered by the Dominion Governments at the time and lands disposed of as free homesteads had been surveyed into square blocks, six miles square. Although the stipulations required the sole head of a family, or any male 18 years of age or older, who was a British subject or declared to become a British subject. There was a substantial movement by single women to file for homesteads as part of the "homesteads for women" in Western Canada movement. This land promotion revived American immigration North into Canada which had largely shut down in 1914 due to the Conscription Acts. See: Sarah Carter, Daughters of British Blood, or Hordes of Men of Alien Race, The Homesteads for- Women Campaign in Western Canada, Great Plains Quarterly, Vol. 29, No. 4 (Fall, 2009), pp. 267-286.. Light wear to spine ends, three staples are rusted but holding strong, light wear to the extremities, a few small tears to maps at the fold creases, else a very good, tight copy of a Canadian land promotional booklet.

The Northerners.
PRONZINI, BILL AND MARTIN H. GREENBERG [EDITED BY].

One Space/Three Visions
THE ALBUQUERQUE MUSEUM