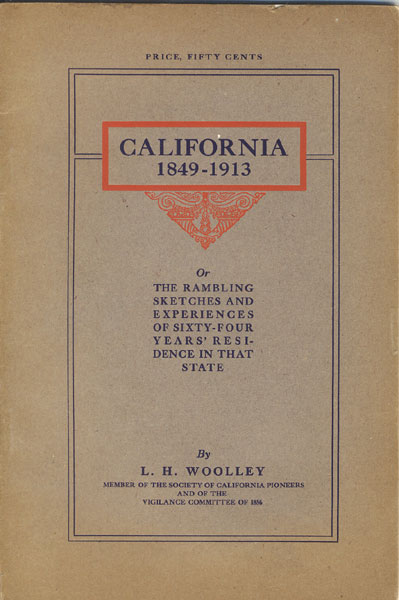 Other works by L. H. WOOLLEY

First edition. 8vo. Original tan wrappers, printed in black and red, 48 pp., frontispiece [portrait], footnotes. In 1849, the author left Vermont to cross the plains to California. Mintz 507 says "Only a few copies of this book were printed. Woolley joined the first mule train of Turner and Allen's Overland Company leaving Independence in May, during the peak of the gold rush. He writes of going overland and also of his part as a member of the San Francisco vigilantes." Kurutz 699 says " ... arrived in Weaverville on September 10, 1849. Weakened by land scurvy he decided not to mine but left for Sacramento City and Grass Valley, where he operated a hotel until he went busted. From there he mined at Beal's Bar near the junction of the North and South Forks of the American River and with thirty other men built a canal to turn the river. While moderately successful, he then went off to Mokelumme Hill, found some color, and sold his claim for $1300." Woolley's recollections are brief and disjointed, but of value as one of the passengers on the ill-fated Pioneer Line who observed the operation from the inside and survived. Light wear to the spine ends and a tiny "ding" to top edge of front cover, else a near fine, clean copy.

Across The Border And Back. Music In The …
DAUDISTEL, MARCIA HATFIELD & BILL WRIGHT [PHOTOGRAPHS BY]

Victoria B. C. City Of Enchantment In Canada's …
WILLISON, LADY [WRITTEN BY]