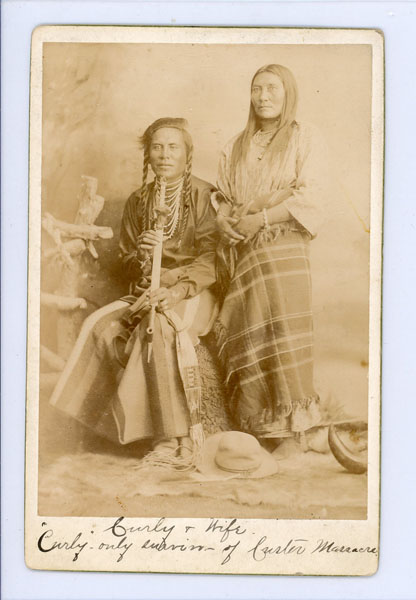 Cabinet Card Photograph Of Curly And His Wife

6 3/8" X 4 1/8" Cabinet card photograph of Curly & Wife. Caption reads "Curly & Wife -- "Curly" only survivor of Custer massacre." Curly was a Crow Indian and a scout assigned to George Armstrong Custer's 7th Cavalry Regiment. He enlisted in the U.S. Army as an Indian scout on April 10, 1876. He served with the 7th Cavalry Regiment under George Armstrong Custer, and was with them at the Battle of Little Bighorn in June of that year, along with five other Crow warrior/scouts. A day or two after the battle, Curly found the Far West, an army supply boat at the confluence of the Bighorn and Little Bighorn Rivers. He was the first to report the 7th's defeat, using a combination of sign language, drawings, and an interpreter. Curly did not claim to have fought in the battle, but only to have witnessed it from a distance; since this first report was accurate, two of the most influential historians of the Battle of the Little Bighorn, Walter Mason Camp (who interviewed Curly on several occasions) and John S. Gray, accepted Curly's early account. ..... Wikipedia The photographer of this photograph is O. S. Goff (1843-1917), who had studios at various times during the 1870s in Montana, and North Dakota. David F. Barry was a protege of O. S. Goff. Nice picture of Curly, a young Crow Indian man and his wife. Both are wearing blankets around the waist and beaded necklaces. Curly is holding a long stemmed pipe. Very good image.

Narrative Of The Surrender Of A Command Of …
Major James Cooper Mckee [Surgeon, U. S. Army]

The Holdouts.
by William. Decker