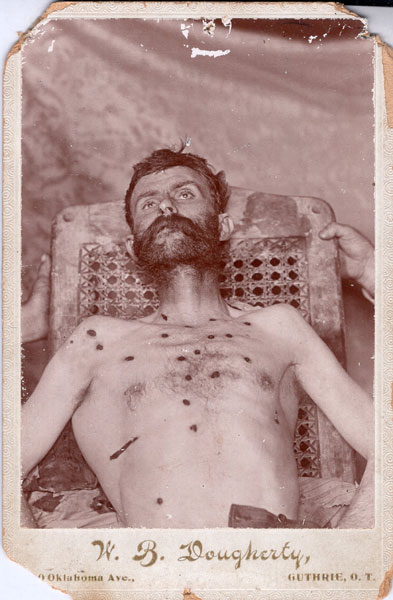 First edition. 5 1/2" x 3 7/8" (death photograph), 6 1/2" x 4 1/4" mount size. Photographer's imprint of W. B. Dougherty, 110 Oklahoma Ave., Guthrie. O. T. is on the lower margin of the front of the card. William "Bill" Doolin, outlaw (1858 - 1896) was born in Johnson County, Arkansas, where he grew up on a farm, becoming 6 feet, 2 inches tall and weighing 150 pounds. Bob McCubbin says: "A famous but rare photograph. Bill Doolin in death, bare chested with eighteen bullet holes after being killed with a shotgun in the hands of Deputy Marshall Heck Thomas. Doolin's eyes are wide open. This is a very famous photograph of Oklahoma Territory's most notorious outlaw." The Album of Gunfighters says: "Bill Doolin was a young cowboy on the Oscar Halsell's HX Bar Ranch in Oklahoma back in the 1880s. Early in the 1890s he organized his band, enlisting among his cowboy friends George Newcombe, Bill Raidler, Roy Daugherty, Little Dick West, Ol Yantis, Red Buck Waightman, and Tulsa Jack Blake. Then Bill Dalton came along. His brothers, Bob and Grat Dalton, had been recently wiped out at Coffeyville, Kansas, (October 2, 1892) while trying to rob the two Coffeyville banks. Thus organized, the Doolin-Dalton gang was set in motion, with Bill Doolin as the main leader. A number of the gang were killed and captured. Finally, Bill Doolin was captured, but escaped, and later was killed by U. S. Marshal Heck Thomas near Lawton, Oklahoma, in July, 1896. The officer used a shotgun and Doolin fell with twenty-one buckshot in his body." Small chip to the margins of three corners, ink and faint pencil notations and tape on the verso of the photograph, else a very good image of a famous outlaw in a rare photograph. Provenance: Robert G. McCubbin Collection.

Strangers On A Train.
by Patricia. Highsmith

Manitoba And The Great North-West: The Field For …
by John. Macoun

Tracks In The Sand. Tales From Outside City …
by Dexter K Oliver