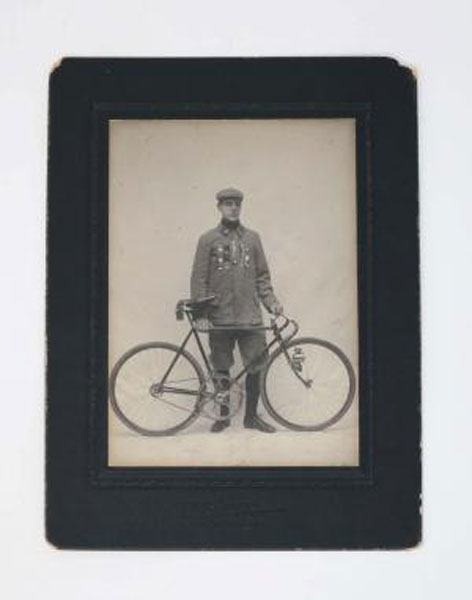 Cabinet Card Of Alfred H. Seeley With His Bicycle

5 1/2" x 3 7/8" photograph mounted on 7 7/8" x 5 3/4" stiff board. On verso is written, "Alfred H. Seeley / Century Road Club / of America / 1906." Image shows Seeley, adorned with ribbons & medals, standing behind his bicycle. This image possibly taken sometime after Seeley finished second [falling once] in the first century race of 1906 [starting & finishing in Brooklyn NY], just trailing Fred Mommer for the winner's honors. Cf. Brooklyn Eagle, 2 January 1906. Founded in 1901 the Century Road Club of America is the oldest and most successful bicycle club in America. L.E. Scherer evidently only a professional photographer for a brief time, as Langdon only has him active, under his own name, for the year 1906. Photograph generally clear & sharp, Very good plus. Mount with some edgewear, top corners rounded.

Rhymes Of The Rockies Or, What The Poets …
Denver & Rio Grande Railroad