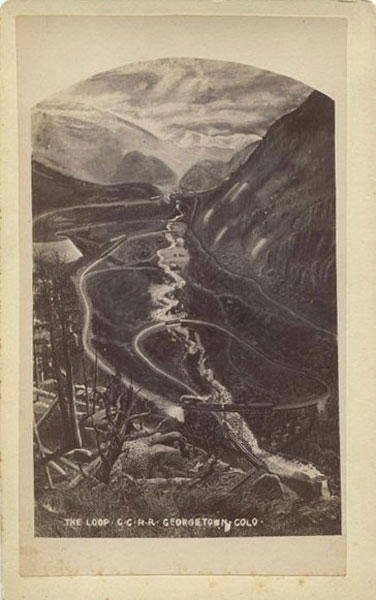 5" x 8" photograph. The Georgetown Loop was completed for the narrow gauge Colorado Central Railroad in 1884. Considered an engineering marvel of its time, it connected the two mining towns of Georgetown and Silver Plume, only two miles apart bur separated by the steep, narrow Clear Creek. To connect them, engineers designed a corkscrew route that traveled nearly four miles, gaining more than 600 feet in elevation. It included horseshoe curves, grades up to four percent, and four bridges across Clear Creek, including a massive Devil's Gate High Bridge, one of the early Colorado visitors attractions. This view shows nearly the whole route, all four bridges with the Devil's Gate Bridge in the foreground and one of the towns in the distance. Three trains can be observed along the route. Photographers stamp of Barkalow Bros. of Denver on back panel. Minor foxing to bottom edge else in fine condition.

A History Of Texas Artists And Sculptors
by Frances Battaile Fisk

Whips Of The West
by David W Morgan

The Day The Cowboys Quit
by Elmer Kelton