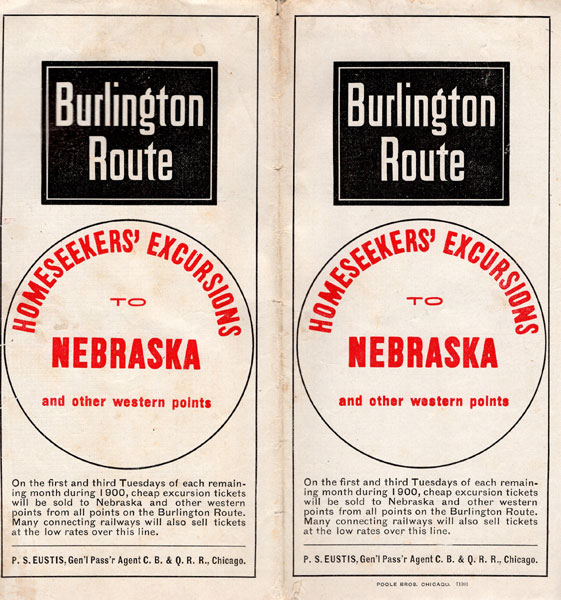 Burlington Route, Homeseekers' Excursions To Nebraska And Other Western Points

Other works by Chicago, Burlington And Quincy Railroad

First edition. 17" x 32" sheet folded to 32 panels. Illustrations. Map. General information on Nebraska and all it has to offer followed by information on the crops of Nebraska to include corn, wheat, broom corn, rye, sugar beets, etc.; stock raising and feeding; its schools and churches; population and lack of prisoners; etc. Time schedules. Information on various excursions. Several letters from Nebraskans who tout the joys of living in the state. Opposite 16 panels offers black and white map of all Nebraska, Northeast Colorado, Northern Kansas and Southern South Dakota. The map is dated 1896 and published by Poole Bros., Chicago. The map shows cities, counties and Burlington Route lines through those areas. Inset is a 5" x 9" system map showing lines from Chicago and north to Minneapolis or northwest to Billings, Montana as well as south to St. Louis or southwest to Denver. Light soiling; rubbing to folds and with small splits at some folds. Overall, very good.

From Coast To Coast. The Only Man To …
PROF GEORGE D. BROWN

The Most Becoming & Attractive Shapes In Fine …
H. O'NEILL & CO