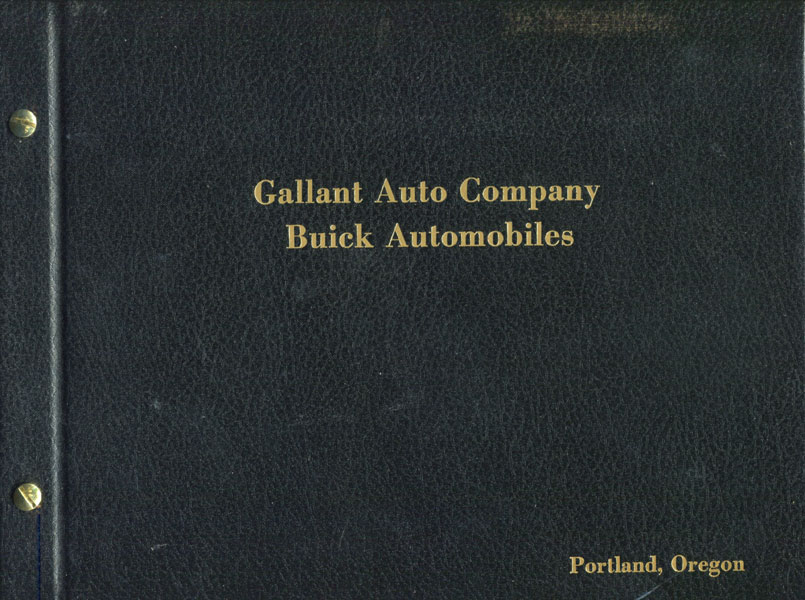 First edition. Recent black cloth post-binder, gilt lettering on front cover, brass screw posts at gutter margin. An exceptional album of 28 promotional photographs for Buick automobiles from 1904 through 1935, together with a photograph of the exterior of the Gallant Bros. dealership which also sold Hudson-Essex Motor Cars in the 1920s. Portland, OR, Astoria, OR & Detroit, MI: Buick Motor Co., General Motors Corp., Gallant Bros., ca. 1935. Twenty-eight (28) photographs inserted into archival transparent sleeves, most with pen annotations on versos identifying year and make of Buick automobile. First edition of this very scarce dealer promotional photograph sales album for Buick passenger cars through the opening three decades of the 20th century. These photos show the early efforts by James Whiting, who hired William Durant in November, 1904, including the 1904 Model B; the 1906 Model F which was a larger and more expensive version of the 1905 Model C; the 1907 Model S 2-seater Runabout; the 1911 Model 39 4- door touring car; the 1912 Model 29 which listed for $ 1180.00; the 1913 Model 31 which featured a 40 horsepower engine and sold for $ 1285.00; the 1917 Model D-47 which heralded the successful return of Durant to GM, and the elevation of Walter Chrysler to Buick Works Manager; and two 1919 models which marked the year that Buick was accounting for over half of GM's sales. There are photographs of the 1924 Model 48 Series 6 and 1925 Master Series, Model 50 which featured 6-cylinder engines as standard, and the beautiful 1927 Model 51 which sold for $1925.00, and proved to be one of the most popular Jazz Age models; and finally the silver anniversary 1929 Buick Model 50 7- passenger 4-door sedan. George Gallant (1890-1945) and his brother Joseph (b. 1892) were Canadian-Americans who began building and selling Hudson-Essex automobiles, and later Buick automobiles in Portland, OR and Astoria, OR after World War I, and would continue to operate their garage in Astoria until World War II. A fine, attractive presentation.