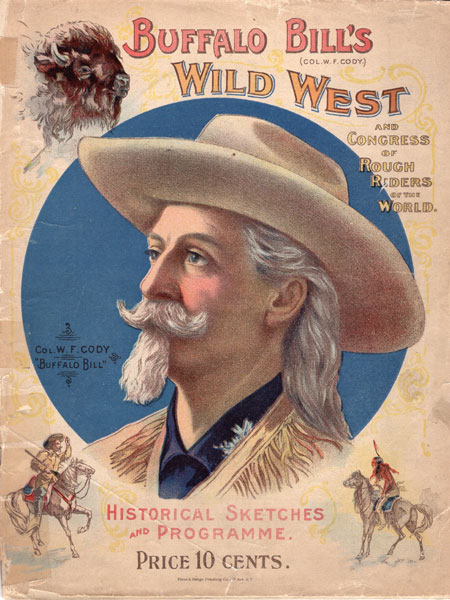 Buffalo Bill's Wild West And Congress Of Rough Riders Of The World.

First edition. 8vo. Colored pictorial wrappers, 64 pp. plus 6 pages of advertisements illustrated [many photographic]. Graff 784 says, "In his best years as a showman, Cody had few rivals." This rousing and ephermal program for Buffalo Bill's Wild West Show contains historical sketches and biographies [often with photographs] of Western military heroes, scouts, and many of the performers, including Annie Oakley, "Cow-Boy Kid" Johnnie Baker, Sitting Bull [and other Native Americans], and Cody [including unusual shots, such as Cody in a gondola in Venice and visiting Earl's Court, London, with his troupe]. On p.20 is a photograph of "Buffalo Bill's Home and Horse Ranch on the Old Fighting Ground of the Pawnee and Sioux." Among the articles are "The Cow-Boys" (discusses Texas cowboys); "Vaqueros of the Southwest"; "How 'Buffalo Bill's' Cow-Boys Tame the Roman Wild Horses"; "Cossacks with the Wild West"; South American Gauchos at the 'Wild West'"; "The Wild West at the Vatican"; "Explicit Denial of the Various Charges Made against 'Buffalo Bill'" (in response to charges of starvation and cruelty to Native Americans in the show); "The Rifle as an Aid to Civilization"; etc. Cody found his true calling in 1882 in his hometown of North Platte, Nebraska. While relaxing at the local saloon one afternoon, he was dismayed to learn that the town had no festivities planned for the Fourth of July. Always the irrepressible showman, he quickly worked up a program to show off cowboy skills, offering prizes for bronco busting, shooting, and riding. He expected about a hundred cowboys, but over a thousand applied. Cody realized that with some added frills, he had the makings of a magnificent theatrical property exhibiting Western prowess. By the following year, Cody organized his flamboyant Wild West Show that brought the romanticized cowboy to America and Europe and transformed the image of the cowboy from uncouth and rowdy to squeaky-clean national hero. Wear to the spine ends, spine reinforced with old cellophane tape, tiny nicks and chips to the cover extremities, internally sound, else a good copy

Hunting Trips Of A Ranchman
by Theodore Roosevelt

The Golden Hoof: The Story Of The Sheep ...
by Winifred Kupper