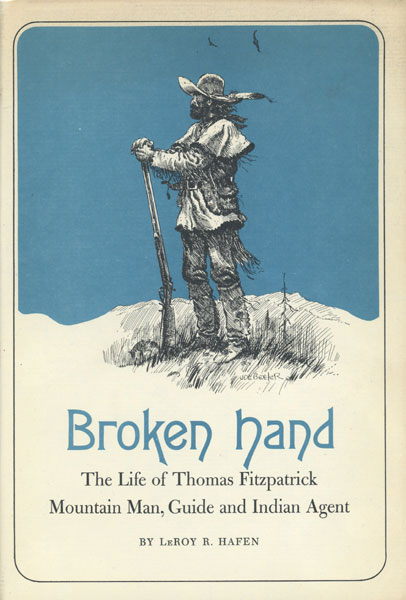 Other works by LEROY R. HAFEN

First revised edition. Signed by the author on the half title page. Blue cloth, titles stamped in gold gilt on the spine, dark gray front and rear endpapers, xiii [blank], 359 pp., preface, introduction, illustrated, plates, portraits, map, footnotes, appendices, index. "Fitzpatrick (1799-1854) ranks with Jedediah Smith, Bridger, and Carson as the four greatest mountain men. His first trip over the Santa Fe trail was in 1831, with the caravan on which Jedediah Smith lost his life. Fitzpatrick was later a guide for such men as Fremont, Abert, and Kearny; in 1846 he was agent for the tribes on the Arkansas, Platte, and Kansas Rivers."---Jack Rittenhouse. "Fitzpatrick was one of the original Ashley men who traveled extensively in the mountains and was a close friend of Jed Smith. Known as "White Hair", he presided at the great 1851 Ft. Laramie Indian Peace Council."---Camille E. Cazedessus II. "Fitzpatrick was not only influential in shaping the fur trade during its formative years, but equally so as an early guide to emigrants and Army expeditions, and as an Indian agent, being generally respected red and white alike for his work in this connection. He has occasionally been hailed with some justification as the greatest of all frontiersmen of his period."---Dan L. Thrapp. The classic biography on this great frontiersman. In the 42 years since the first publication, competent and dedicated scholars have unearthed substantial new facts and much additional information. This has necessitated a complete rewriting of the first half of the book and considerable revision of the remainder. This new biography will serve its intended purpose to bring to light even more information on the great mountain man. Fine, bright copy in dust jacket, housed in the original blue slipcase with a paper label on the front. An attractive copy of this mountain man/fur trade classic.

The Memoirs Of Charles Henry Veil. A Soldier's …
VIOLA, HERMAN J. [EDITED AND WITH AN INTRODUCTION BY]