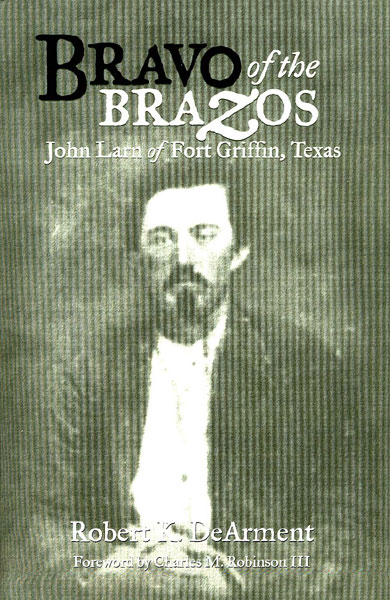 Bravo Of The Brazos. John Larn Of Fort Griffin, Texas

First edition. 8vo. Signed by the author on a label and laid-in. Cloth, silver stamping on the spine, xviii, 222 pp., frontis. [photograph of John Larn], foreword, acknowledgments, illustrated, afterword, abbreviations, notes, bibliography, index. Foreword by Charles M. Robinson III. More than a century after his death in 1878, the mention of John Larn's name can still trigger strong reactions along the Clear Fork of the Brazos River in northern Texas. Larn was a successful rancher and renowned frontier sheriff who enjoyed wide-spread support for his quick action against horse and cattle thieves. This support eroded quickly when he began killing for profit or revenge. At 29 years of age he threatened to reveal the names of prominent citizens involved in his vigilante committee, and lost public support. A mob composed of his relatives and former friends and associates brought his popular, murderous career to a sudden halt before he could reveal any names. The author reveals those names as he tells Larn's story. Fine in dust jacket.

"The Oriental Saloon, Tombstone, A. T"
by Joseph W. Harvey