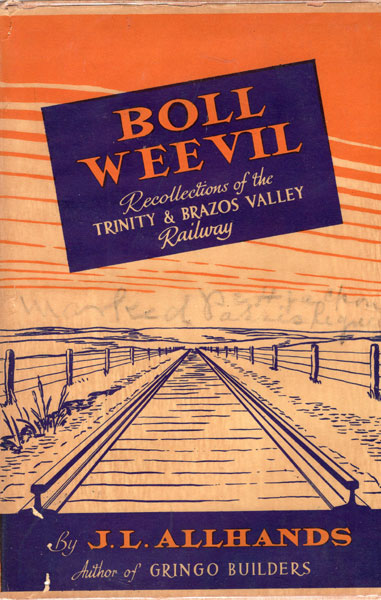 First trade edition. 8vo. Decorated linen, maps on front and rear endpapers, [38], 279 pp. plus 48 pp., frontispiece, foreword, illustrated from photographs, sources, index, appendix. The history of the development of the Trinity and Brazos Valley Railway and the men who worked to ensure its success. Includes the people and events surrounding the building of this pre-WWI railroad, not the least interesting is the history and folklore of communities and place-names of towns served. The railway received its nickname "Boll Weevil" due to the ravages of the boll weevil against the cotton crops and while this small railroad was getting started it was remembered that it did not have a nickname, so the name "Boll Weevil" was suggested. The name stuck and the line was known far and wide, until the new and rejuvenated Trinity & Brazos Valley adopted the name "The Valley Road" as its official name. The line served central and coastal Texas well. Faint hand written name of E. H. Jackson on Illustrations page and a bit of underlining to a few pages, light wear to the fore-edges of a few pages due to being opened carelessly, else a very good, tight copy in the elusive dust jacket with the faint, hand written name of E. H. Jackson on the front cover and a few tiny nicks to the extremities.

Colorado Via The Burlington Route [Cover Title]
THE BURLINGTON ROUTE