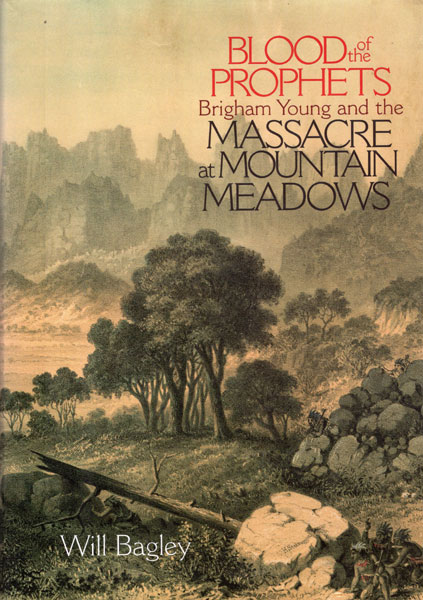 Other works by WILL BAGLEY

First edition. Two-tone quarter cloth and decorated boards, burnt orange colored endpapers, xxiv, 493 pp., frontis., [portrait of Brigham Young], preface, acknowledgments, prologue, illustrated, maps, notes, bibliography, index. At Mountain Meadows on Sept. 11, 1857, local settlers and Paiute warriors waylaid the Fancher party, a wagon train bound from Arkansas to California. Pinned down in a circle of wagons in a remote corner of southwestern Utah the 70 men and women and 70 children fought for their lives for five days. Then under a promise of safe conduct they surrendered to the Mormon militia and their Indian allies. As they were escorted away from their wagons all were murdered except seventeen children under the age of seven. The author relies on unpublished journals, letters, and documents from Mormon archives as well as from accounts by Mormons who opposed subsequent efforts to cover up or expunge the record. He explains the involvement of territorial governor Brigham Young in this tragedy. There are many maps and photographs never before published. Fine in dust jacket.

Sixteen Years On The Great American Desert Or, …
MRS A. M. GREEN

The Round-Up. A Romance Of Arizona.
JOHN AND MILLS MILLER MURRAY