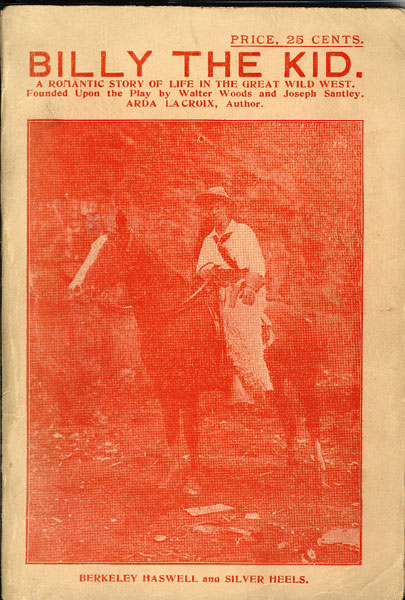 Billy The Kid. A Romantic Story Founded Upon The Play Of The Same Name

Other works by ARDA LACROIX

First edition. 12mo. Pictorial wrappers, [4], 128 pp., frontis. [portrait]. An outlaw rarity today. Six Guns 1263 says "This little volume has now become scarce and a collector's item. It is based upon the play by Walter Woods and Joseph Santley. The novel version follows the play closely, and of course, both are fiction." Dykes Kid 286 says ".... BILLY THE KID was a successful play for twelve consecutive years. After an opening run in the New York Star Theatre in New York, beginning August 13, 1906, it enjoyed long runs at leading theatres throughout the country. The management claimed in 1913 that the play had already been witnessed by over six million people; probably the total reached ten million before the final curtain in 1918." Pages uniformly browned, light wear to the spine ends, else a very good copy. DYKES KID 38, 48, 286. SIX GUNS 1263.

The History Of The Common Maize Varieties Of …
EDGAR AND WILLIAM L. BROWN ANDERSON