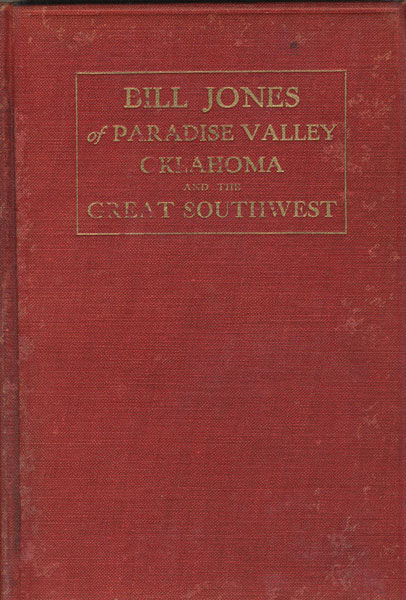 Bill Jones Of Paradise Valley Oklahoma. His Life And Adventures For Over Forty Years In The Great Southwest. He Was A Pioneer In The Days Of The Buffalo, The Wild Indian, The Oklahoma Boomer, The Cowboy And The Outlaw.

First edition. 8vo. Original maroon cloth, gold stamping on front cover and spine, frontis., 328 pp., preface, illustrated. "In the old days, when that part of the West, stretching from the Missouri river to the Rockies, and from the Rio Grande to the British possessions, was an almost unbroken wilderness, inhabited by roaming Indians and wild animals, there came a class of men, lured by the love of adventure, who were not afraid to brave the hardships of pioneer life." This book is the story of one of those pioneers. Six Guns 365 says, "This privately printed book was written in a humorous vein, and contains some material on the Dodge City gunmen and Billy the Kid. .... I corresponded with this old-timer before his death and bought all the remaining copies of his book. It was a very scarce item until I began releasing the remainder, and it is still scarce." Herd 398 says "Scarce." The former owner, Grant H. Clayton, has made a number of penciled comments on the front endpapers, as well as underlining sections throughout the book. Additionally, laid-in is a letter to an Oklahoma City bookseller dated December 19, 1978, from Clayton requesting titles he is interested to buy. The bookseller responds in red ink to each of his questions. Former owner's business card affixed to front paste-down sheet, notations on front endpapers and throughout the text, and front cloth lightly mottled, else very good, tight copy of a difficult title. SIX GUNS 365. HERD 398. HOWES C76.

Claude Melnotte As A Detective, And Other Stories.
by Allan. Pinkerton

The James Boys Rode South, A Thrilling And …
by W. Stanley Hoole