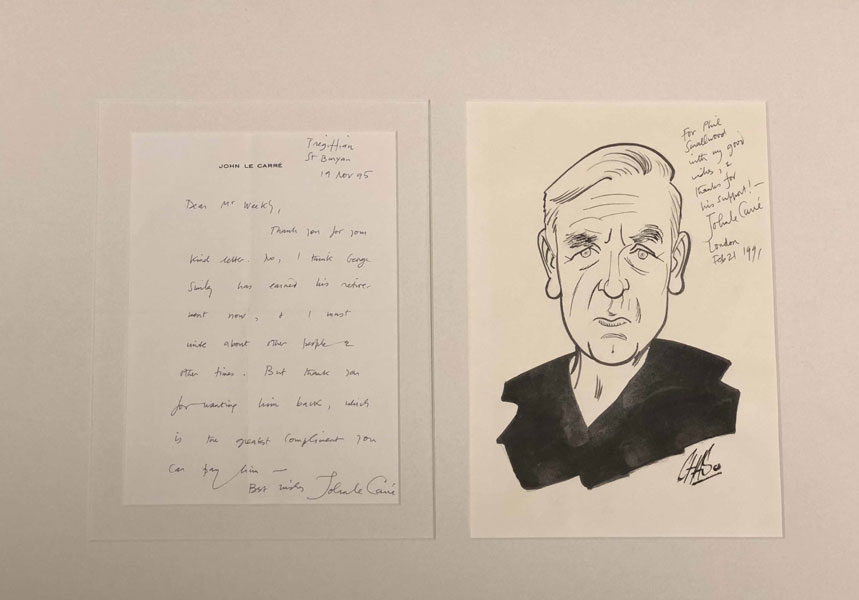 An autograph letter signed from John Le Carré regarding the retirement of George Smiley. Written in black ink on the author's letterhead and dated 19th November 1995 he writes "I think George Smiley has earned his retirement now, and I must write about other people and other times. But thank you for wanting him back, which is the greatest compliment you can pay him - Best wishes John Le Carré". Together with an original ink caricature of John Le Carré in pencil and black ink on white paper, signed by the artist Chas. bottom right. The drawing is also inscribed by the subject in black in at the upper right corner "For Phil Smallwood with my good wishes and thanks for his support! - John Le Carré, London Feb 21 1991". Both items are presented side by side within a white card mount. Condition is excellent, the letter with a single horizontal fold otherwise both in fine condition Tastefully presented in a 25" x 17 1/2" matted format, suitable for framing. At the time of writing the letter, George Smiley had been retired for 5 years (after The Secret Pilgrim) and would remain so for another 20 or so until returning in Le Carré's 2017 thriller A Legacy of Spies. A choice item.

Woman In The Dark
VANESSA SAVAGE